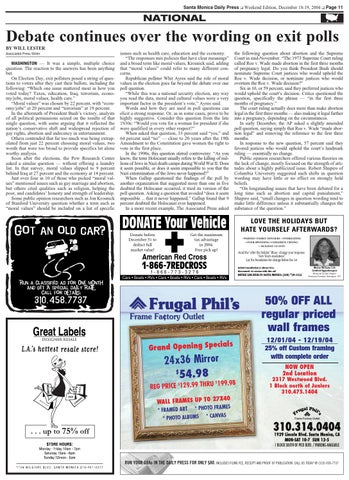 WASHINGTON — It was a simple, multiple choice question. The reaction to the answers has been anything but. On Election Day, exit pollsters posed a string of questions to voters after they cast their ballots, including the following: “Which one issue mattered most in how you voted today? Taxes, education, Iraq, terrorism, economy/jobs, moral values, health care.” “Moral values” was chosen by 22 percent, with “economy/jobs” at 20 percent and “terrorism” at 19 percent. In the aftermath of President Bush’s victory, analysts of all political persuasions seized on the results of that single question, with some arguing that it reflected the nation’s conservative shift and widespread rejection of gay rights, abortion and indecency in entertainment. Others contended that far too much was being extrapolated from just 22 percent choosing moral values, two words that were too broad to provide specifics let alone worthy analysis. Soon after the elections, the Pew Research Center asked a similar question — without offering a laundry list. In that survey, moral values slipped to 9 percent behind Iraq at 27 percent and the economy at 14 percent. Just over four in 10 of those who picked “moral values” mentioned issues such as gay marriage and abortion, but others cited qualities such as religion, helping the poor, and candidates’ honesty and strength of leadership. Some public opinion researchers such as Jon Krosnick of Stanford University question whether a term such as “moral values” should be included on a list of specific

issues such as health care, education and the economy. “The responses mix policies that have clear meanings” and a broad term like moral values, Krosnick said, adding that “moral values” could refer to many different concerns. Republican pollster Whit Ayres said the role of moral values in the election goes far beyond the debate over one poll question. “While this was a national security election, any way you read the data, moral and cultural values were a very important factor in the president’s vote,” Ayres said. Words and how they are used in poll questions can elicit a strong response. Or, as in some cases, prove to be highly suggestive. Consider this question from the late 1930s: “Would you vote for a woman for president if she were qualified in every other respect?” When asked that question, 33 percent said “yes,” and 64 percent said “no” — close to 20 years after the 19th Amendment to the Constitution gave women the right to vote in the first place. In the 1990s, this question stirred controversy: “As you know, the term Holocaust usually refers to the killing of millions of Jews in Nazi death camps during World War II. Does it seem possible, or does it seem impossible to you that the Nazi extermination of the Jews never happened?” When Gallup questioned the findings of the poll by another organization that suggested more than one in five doubted the Holocaust occurred, it tried its version of the poll question. Asking a question that avoided “does it seem impossible ... that it never happened,” Gallup found that 9 percent doubted the Holocaust ever happened. In a more recent example, The Associated Press asked

the following question about abortion and the Supreme Court in mid-November: “The 1973 Supreme Court ruling called Roe v. Wade made abortion in the first three months of pregnancy legal. Do you think President Bush should nominate Supreme Court justices who would uphold the Roe v. Wade decision, or nominate justices who would overturn the Roe v. Wade decision?” Six in 10, or 59 percent, said they preferred justices who would uphold the court’s decision. Critics questioned the question, specifically the phrase — “in the first three months of pregnancy.” The court ruling actually does more than make abortion legal in the first three months — also making it legal farther into a pregnancy, depending on the circumstances. In early December, the AP asked a slightly amended poll question, saying simply that Roe v. Wade “made abortion legal” and removing the reference to the first three months. In response to the new question, 57 percent said they favored justices who would uphold the court’s landmark ruling — essentially no change. Public opinion researchers offered various theories on the lack of change, mostly focused on the strength of attitudes about a highly publicized issue. Robert Shapiro of Columbia University suggested such shifts in question wording may have little or no effect on strongly held beliefs. “On longstanding issues that have been debated for a long time such as abortion and capital punishment,” Shapiro said, “small changes in question wording tend to make little difference unless it substantially changes the substance of the question.”

LOVE THE HOLIDAYS BUT HATE YOURSELF AFTERWARDS?

Get the maximum tax advantage in 2004. Free pick up!

Avoid the “after the holiday” Blues - change your response. New Year’s resolution? Lay the foundation for change before the 1st Initial Consultation is always free. Discounted 1st session with this ad! 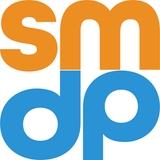 The newspaper of record for the City of Santa Monica and surrounding areas.

The newspaper of record for the City of Santa Monica and surrounding areas.