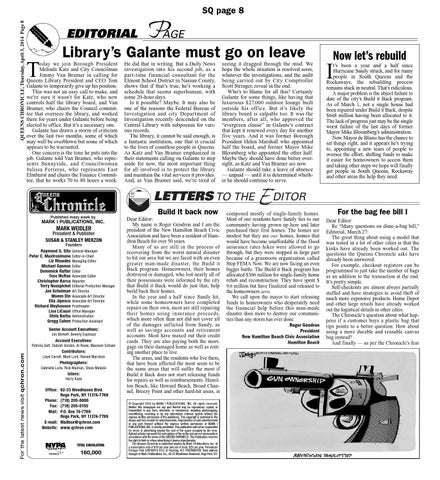 Library’s Galante must go on leave

oday we join Borough President Melinda Katz and City Councilman Jimmy Van Bramer in calling for Queens Library President and CEO Tom Galante to temporarily give up his position. This was not an easy call to make, and we’re sure it wasn’t for Katz, who now controls half the library board, and Van Bramer, who chairs the Council committee that oversees the library, and worked there for years under Galante before being elected to office. But it’s a necessary one. Galante has drawn a storm of criticism over the last two months, some of which may well be overblown but some of which appears to be warranted. One concern is the time he puts into the job. Galante told Van Bramer, who represents Sunnyside, and Councilwoman Julissa Ferreras, who represents East Elmhurst and chairs the Finance Committee, that he works 70 to 80 hours a week.

He did that in writing. But a Daily News investigation into his second job, as a part-time financial consultant for the Elmont School District in Nassau County, shows that if that’s true, he’s working a schedule that seems superhuman, with some 20-hour days. Is it possible? Maybe. It may also be one of the reasons the Federal Bureau of Investigation and city Department of Investigation recently descended on the Central Library with subpoenas for various records. The library, it cannot be said enough, is a fantastic institution, one that is crucial to the lives of countless people in Queens. As Katz and Van Bramer emphasized in their statements calling on Galante to step aside for now, the most important thing for all involved is to protect the library and maintain the vital services it provides. And, as Van Bramer said, we’re tired of

seeing it dragged through the mud. We hope the whole situation is resolved soon, whatever the investigations, and the audit being carried out by City Comptroller Scott Stringer, reveal in the end. Who’s to blame for all this? Certainly Galante for some things, like having that luxurious $27,000 outdoor lounge built outside his office. But it’s likely the library board is culpable too. It was the members, after all, who approved the “evergreen clause” in Galante’s contract that kept it renewed every day for another five years. And it was former Borough President Helen Marshall who appointed half the board, and former Mayor Mike Bloomberg who appointed the other half. Maybe they should have done better oversight, as Katz and Van Bramer are now. Galante should take a leave of absence — unpaid — until it is determined whether he should continue to serve.

L LETTERS TO THE Published every week by

Build it back now Dear Editor: My name is Roger Gendron and I am the president of the New Hamilton Beach Civic Association and have been a resident of Hamilton Beach for over 50 years. Many of us are still in the process of recovering from the worst natural disaster to hit our area but we are faced with an even greater man-made disaster, the Build it Back program. Homeowners, their homes destroyed or damaged, who lost nearly all of their possessions were informed by the city that Build it Back would do just that, help build back their homes. In the year and a half since Sandy hit, while some homeowners have completed repairs on their own, most are still repairing their homes using insurance proceeds, which more often than not did not cover all of the damages inf licted from Sandy, as well as savings accounts and retirement accounts. Most have maxed out their credit cards. They are also paying both the mortgage on their damaged home as well as renting another place to live. The areas, and the residents who live there, that have been affected the most seem to be the same areas that will suffer the most if Build it Back does not start releasing funds for repairs as well as reimbursements. Hamilton Beach, like Howard Beach, Broad Channel, Breezy Point and other hard-hit areas, is © Copyright 2014 by MARK I PUBLICATIONS, INC. All rights reserved. Neither this newspaper nor any part thereof may be reproduced, copied, or transmitted in any form, electronic or mechanical, including photocopying, microfilming, recording or by any information retrieval system without the express written permission of the publishers. This copyright is extended to the design and text created for advertisements. Reproduction of said advertisement or any part thereof without the express written permission of MARK I PUBLICATIONS, INC. is strictly prohibited. This publication will not be responsible for errors in advertising beyond the cost of the space occupied by the error. Bylined articles represent the sole opinion of the writer and are not necessarily in accordance with the views of the QUEENS CHRONICLE. This Publication reserves the right to limit or refuse advertising it deems objectionable. The Queens Chronicle is published weekly by Mark I Publications, Inc. at a subscription rate of $19 per year and out of state, $25 per year. Periodicals Postage Paid (USPS0013-572) at Flushing, N.Y. POSTMASTER: Send address changes to Mark I Publications, Inc., 62-33 Woodhaven Boulevard, Rego Park, N.Y.

composed mostly of single-family homes. Most of our residents have family ties to our community having grown up here and later purchased their first homes. The homes are modest but they are our homes, homes that would have become unaffordable if the flood insurance rates hikes were allowed to go through, but they were stopped in large part because of a grassroots organization called Stop FEMA Now. We are now facing an even bigger battle. The Build it Back program has allocated $306 million for single-family home rehab and reconstruction. They have spent $ 9.6 million but have finalized and released to the homeowners zero. We call upon the mayor to start releasing funds to homeowners who desperately need the financial help before this man-made disaster does more to destroy our communities than any storm has ever done. Roger Gendron President New Hamilton Beach Civic Association Hamilton Beach

t’s been a year and a half since Hurricane Sandy struck, and for many people in South Queens and the Rockaways, the rebuilding process remains stuck in neutral. That’s ridiculous. A major problem is the abject failure to date of the city’s Build it Back program. As of March 1, not a single house had been repaired under Build it Back, despite $648 million having been allocated to it. The lack of progress just may be the single worst failure of the last days of former Mayor Mike Bloomberg’s administration. Now Mayor de Blasio has the chance to set things right, and it appears he’s trying to, appointing a new team of people to oversee the effort, shifting funds to make it easier for homeowners to access them and taking other steps we hope will finally get people in South Queens, Rockaway and other areas the help they need.

For the bag fee bill I Dear Editor: Re “Many questions on dime-a-bag bill,” Editorial, March 27: The great thing about using a model that was tested in a lot of other cities is that the kinks have already been worked out. The questions the Queens Chronicle asks have already been answered. For example, checkout registers can be programmed to just take the number of bags as an addition to the transaction at the end. It’s pretty simple. Self-checkouts are almost always partially staffed and have strategies to avoid theft of much more expensive products. Home Depot and other large retails have already worked out the logistical details in other cities. The Chronicle’s question about what happens if a customer buys a plastic bag that rips points to a better question: How about using a more durable and reusable canvas bag instead? And finally — as per the Chronicle’s fear