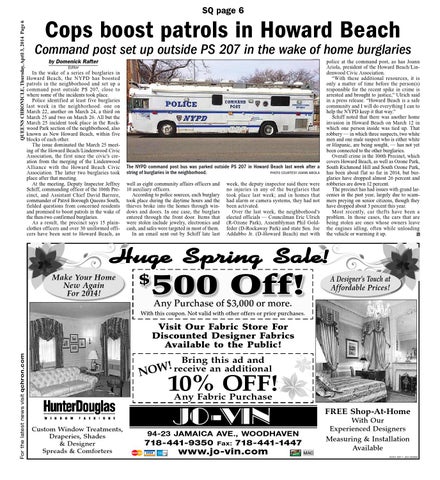 In the wake of a series of burglaries in Howard Beach, the NYPD has boosted patrols in the neighborhood and set up a command post outside PS 207, close to where some of the incidents took place. Police identified at least five burglaries last week in the neighborhood. one on March 22, another on March 24, a third on March 25 and two on March 26. All but the March 25 incident took place in the Rockwood Park section of the neighborhood, also known as New Howard Beach, within five blocks of each other. The issue dominated the March 25 meeting of the Howard Beach/Lindenwood Civic Association, the first since the civic’s creation from the merging of the Lindenwood Alliance with the Howard Beach Civic Association. The latter two burglaries took place after that meeting. At the meeting, Deputy Inspector Jeffrey Schiff, commanding officer of the 106th Precinct, and Assistant Chief David Barrere, commander of Patrol Borough Queens South, fielded questions from concerned residents and promised to boost patrols in the wake of the then-two confirmed burglaries. As a result, the precinct says 15 plainclothes officers and over 30 uniformed officers have been sent to Howard Beach, as

The NYPD command post bus was parked outside PS 207 in Howard Beach last week after a PHOTO COURTESY JOANN ARIOLA string of burglaries in the neighborhood. well as eight community affairs officers and 10 auxiliary officers. According to police sources, each burglary took place during the daytime hours and the thieves broke into the homes through windows and doors. In one case, the burglars entered through the front door. Items that were stolen include jewelry, electronics and cash, and safes were targeted in most of them. In an email sent out by Schiff late last

week, the deputy inspector said there were no injuries in any of the burglaries that took place last week; and in homes that had alarm or camera systems, they had not been activated. Over the last week, the neighborhood’s elected officials — Councilman Eric Ulrich (R-Ozone Park), Assemblyman Phil Goldfeder (D-Rockaway Park) and state Sen. Joe Addabbo Jr. (D-Howard Beach) met with

police at the command post, as has Joann Ariola, president of the Howard Beach/Lindenwood Civic Association. “With these additional resources, it is only a matter of time before the person(s) responsible for the recent spike in crime is arrested and brought to justice,” Ulrich said in a press release. “Howard Beach is a safe community and I will do everything I can to help the NYPD keep it that way.” Schiff noted that there was another home invasion in Howard Beach on March 12 in which one person inside was tied up. That robbery — in which three suspects, two white men and one male suspect who is either white or Hispanic, are being sought, — has not yet been connected to the other burglaries. Overall crime in the 106th Precinct, which covers Howard Beach, as well as Ozone Park, South Richmond Hill and South Ozone Park, has been about flat so far in 2014, but burglaries have dropped almost 26 percent and robberies are down 12 percent. The precinct has had issues with grand larcenies in the past year, largely due to scammers preying on senior citizens, though they have dropped about 3 percent this year. Most recently, car thefts have been a problem. In those cases, the cars that are being stolen are ones whose owners leave the engines idling, often while unloading Q the vehicle or warming it up.

A Designer’s Touch at Affordable Prices!

With this coupon. Not valid with other offers or prior purchases.

Visit Our Fabric Store For Discounted Designer Fabrics Available to the Public!

Bring this ad and

10% OFF! Any Fabric Purchase JO-VIN

FREE Shop-At-Home With Our Experienced Designers