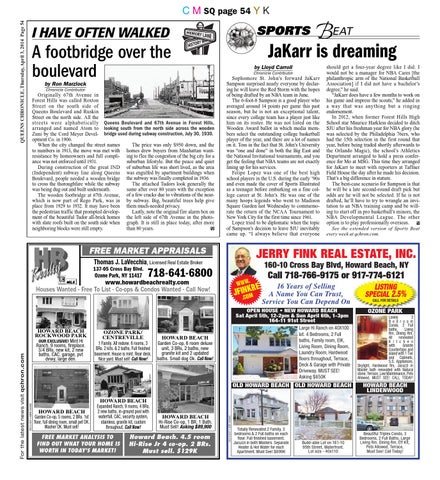 I HAVE OFTEN WALKED

A footbridge over the boulevard by Ron Marzlock Chronicle Contributor

Originally 67th Avenue in Forest Hills was called Roxton Street on the south side of Queens Boulevard and Ruskin Street on the north side. All the st reets were alphabetically Queens Boulevard and 67th Avenue in Forest Hills, arranged and named Atom to looking south from the north side across the wooden Zuni by the Cord Meyer Devel- bridge used during subway construction, July 30, 1930. opment Co. in 1906. The price was only $950 down, and the When the city changed the street names to numbers in 1913, the move was met with homes drew buyers from Manhattan wantresistance by homeowners and full compli- ing to flee the congestion of the big city for a suburban lifestyle. But the peace and quiet ance was not enforced until 1931. During construction of the great IND of suburban life was short lived, as the area (Independent) subway line along Queens was engulfed by apartment buildings when Boulevard, people needed a wooden bridge the subway was finally completed in 1936. The attached Tudors look generally the to cross the thoroughfare while the subway same after over 80 years with the exception was being dug out and built underneath. The wooden footbridge at 67th Avenue, of a few cracks due to vibrations of the nearwhich is now part of Rego Park, was in by subway. Big, beautiful trees help give place from 1929 to 1932. It may have been them much-needed privacy. Lastly, note the original fire alarm box on the pedestrian traffic that prompted development of the beautiful Tudor all-brick homes the left side of 67th Avenue in the photowith slate roofs built on the south side when graph. It is still in place today, after more Q than 80 years. neighboring blocks were still empty.

Sophomore St. John’s forward JaKarr Sampson surprised nearly everyone by declaring he will leave the Red Storm with the hopes of being drafted by an NBA team in June. The 6-foot-8 Sampson is a good player who averaged around 14 points per game this past season, but he is not an exceptional talent, since every college team has a player just like him on its roster. He was not listed on the Wooden Award ballot in which media members select the outstanding college basketball player of the year, and there are a lot of names on it. Toss in the fact that St. John’s University was “one and done” in both the Big East and the National Invitational tournaments, and you get the feeling that NBA teams are not exactly lining up for his services. Felipe Lopez was one of the best high school players in the U.S. during the early ’90s and even made the cover of Sports Illustrated as a teenager before embarking on a fine college career at St. John’s. He was one of the many hoops legends who went to Madison Square Garden last Wednesday to commemorate the return of the NCAA Tournament to New York City for the first time since 1961. Lopez tried to be diplomatic when the topic of Sampson’s decision to leave SJU inevitably came up. “I always believe that everyone

FREE MARKET ANALYSIS TO FIND OUT WHAT YOUR HOME IS WORTH IN TODAY'S MARKET!

should get a four-year degree like I did. I would not be a manager for NBA Cares [the philanthropic arm of the National Basketball Association] if I did not have a bachelor’s degree,” he said. “JaKarr does have a few months to work on his game and impress the scouts,” he added in a way that was anything but a ringing endorsement. In 2012, when former Forest Hills High School star Maurice Harkless decided to ditch SJU after his freshman year for NBA glory (he was selected by the Philadelphia 76ers, who had the 15th selection in the first round that year, before being traded shortly afterwards to the Orlando Magic), the school’s Athletics Department arranged to hold a press conference for Mo at MSG. This time they arranged for JaKarr to meet with reporters at Taffner Field House the day after he made his decision. That’s a big difference in stature. The best-case scenario for Sampson is that he will be a late second-round draft pick but odds are he will not be selected. If he is not drafted, he’ll have to try to wrangle an invitation to an NBA training camp and be willing to start off in pro basketball’s minors, the NBA Developmental League. The other option is to play professionally overseas. Q See the extended version of Sports Beat every week at qchron.com.