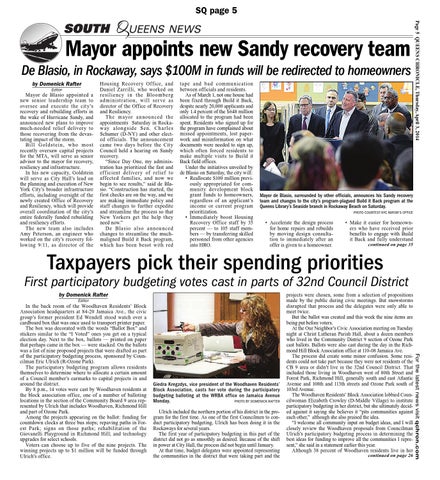 De Blasio, in Rockaway, says $100M in funds will be redirected to homeowners by Domenick Rafter Editor

Mayor de Blasio appointed a new senior leadership team to oversee and execute the city’s recovery and rebuilding efforts in the wake of Hurricane Sandy, and announced new plans to improve much-needed relief delivery to those recovering from the devastating impact of the storm. Bi l l Gold st ei n , who most recently oversaw capital projects for the MTA, will serve as senior advisor to the mayor for recovery, resiliency and infrastructure. In his new capacity, Goldstein will serve as City Hall’s lead on the planning and execution of New York City’s broader infrastructure efforts, including oversight of the newly created Office of Recovery and Resiliency, which will provide overall coordination of the city’s entire federally funded rebuilding and resiliency efforts. The new team also includes Amy Peterson, an engineer who worked on the city’s recovery following 9/11, as director of the

Housing Recovery Office, and Daniel Zarrilli, who worked on resiliency i n t he Bloomberg ad minist ration, will ser ve as director of the Office of Recovery and Resiliency. T he mayor a n nou nced the appointments Saturday in Rockaway a longside Se n. C h a rle s Schumer (D-NY) and other elected officials. The announcement came two days before the City Council held a hearing on Sandy recovery. “Since Day One, my administration has prioritized the fast and eff icient deliver y of relief to affected families, and now we begin to see results,” said de Blasio. “Construction has started, the first checks are on the way, and we are making immediate policy and staff changes to further expedite and streamline the process so that New Yorkers get the help they need now.” De Blasio also a n nou nced changes to streamline the muchmaligned Build it Back program, which has been besot with red

tape and bad com mu nication between officials and residents. As of March 1, not one house had been fixed through Build it Back, despite nearly 20,000 applicants and only 1.4 percent of the $648 million allocated to the program had been spent. Residents who signed up for the program have complained about missed appointments, lost paperwork and misinformation on what documents were needed to sign up, which often forced residents to make multiple visits to Build it Back field offices. Under the initiatives unveiled by de Blasio on Saturday, the city will: • Reallocate $100 million previously appropriated for community development block grant funds to homeowners, regardless of an applicant’s income or current program prioritization. • Immediately boost Housing Recovery Office staff by 35 percent — to 105 staff members — by transferring skilled personnel from other agencies into HRO.

Mayor de Blasio, surrounded by other officials, announces his Sandy recovery team and changes to the city’s program-plagued Build it Back program at the Queens Library’s Seaside branch in Rockaway Beach on Saturday. PHOTO COURTESY NYC MAYOR’S OFFICE

• Accelerate the design process for home repairs and rebuilds by moving design consultation to immediately after an offer is given to a homeowner.

Giedra Kregzdys, vice president of the Woodhaven Residents’ Block Association, casts her vote during the participatory budgeting balloting at the WRBA office on Jamaica Avenue PHOTO BY DOMENICK RAFTER Monday. Ulrich included the northern portion of his district in the program for the first time. As one of the first Councilmen to conduct participatory budgeting, Ulrich has been doing it in the Rockaways for several years. The first year of participatory budgeting in this part of the district did not go as smoothly as desired. Because of the shift in power at City Hall, the process did not begin until January. At that time, budget delegates were appointed representing the communities in the district that were taking part and the

In the back room of the Woodhaven Residents’ Block Association headquarters at 84-20 Jamaica Ave., the civic group’s former president Ed Wendell stood watch over a cardboard box that was once used to transport printer paper. The box was decorated with the words “Ballot Box” and stickers similar to the “I Voted” ones you get on a typical election day. Next to the box, ballots — printed on paper that perhaps came in the box — were stacked. On the ballots was a list of nine proposed projects that were drafted as part of the participatory budgeting process, sponsored by Councilman Eric Ulrich (R-Ozone Park). The participatory budgeting program allows residents themselves to determine where to allocate a certain amount of a Council member’s earmarks to capital projects in and around the district. By 8 p.m., 14 votes were cast by Woodhaven residents at the block association office, one of a number of balloting locations in the section of the Community Board 9 area represented by Ulrich that includes Woodhaven, Richmond Hill and part of Ozone Park. Among the projects appearing on the ballot: funding for countdown clocks at three bus stops; repaving paths in Forest Park; signs on those paths; rehabilitation of the Giovanelli Playground in Richmond Hill; and technology upgrades for select schools. Voters can choose up to five of the nine projects. The winning projects up to $1 million will be funded through Ulrich’s office.

projects were chosen, some from a selection of propositions made by the public during civic meetings. But snowstorms disrupted that process and the delegates were only able to meet twice. But the ballot was created and this week the nine items are being put before voters. At the Our Neighbor’s Civic Association meeting on Tuesday night at Christ Lutheran Parish Hall, about a dozen members who lived in the Community District 9 section of Ozone Park cast ballots. Ballots were also cast during the day in the Richmond Hill Block Association office at 110-08 Jamaica Ave. The process did create some minor confusion. Some residents could not take part because they were not residents of the CB 9 area or didn’t live in the 32nd Council District. That included those living in Woodhaven west of 80th Street and Forest Park, Richmond Hill, generally south and east Atlantic Avenue and 108th and 113th streets and Ozone Park south of 103rd Avenue. The Woodhaven Residents’ Block Association lobbied Councilwoman Elizabeth Crowley (D-Middle Village) to institute participatory budgeting in her district, but she ultimately decided against it saying she believes it “pits communities against each other,” although she also praised the idea. “I welcome all community input on budget ideas, and I will closely review the Woodhaven proposals from Councilman Ulrich’s participatory budgeting process in determining the best ideas for funding to improve all the communities I represent,” she said in a statement earlier this year. Although 38 percent of Woodhaven residents live in her continued on page 26