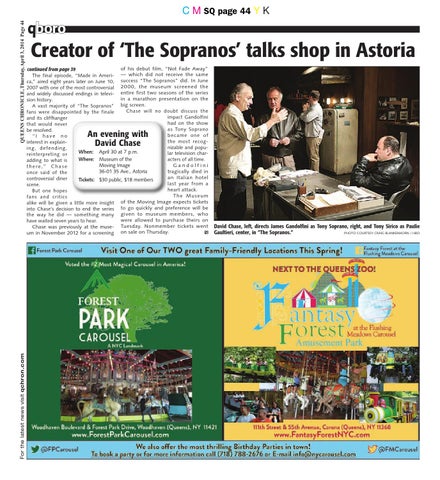 Creator of ‘The Sopranos’ talks shop in Astoria continued of his debut film, “Not Fade Away” continuedfrom frompage page00 39 The final episode, “Made in Ameri- — which did not receive the same ca,” aired eight years later on June 10, success “The Sopranos” did. In June 2007 with one of the most controversial 20 0 0, the museum screened the and widely discussed endings in televi- entire first two seasons of the series in a marathon presentation on the sion history. A vast majority of “The Sopranos” big screen. Cha se will no doubt discuss the fans were disappointed by the finale impact Gandolfini and its cliffhanger had on the show that would never as Tony Soprano be resolved. b e c a me one of “I have no the most recoginterest in explainnizable and popuing, defending, When: April 30 at 7 p.m. lar television charreinterpreting or Where: Museum of the acters of all time. adding to what is Moving Image Gandolfini t h e r e ,” C h a s e 36-01 35 Ave., Astoria tragically died in once said of the an Italian hotel controversial diner Tickets: $30 public, $18 members last year from a scene. heart attack. But one hopes The Museum fans and critics of the Moving Image expects tickets alike will be given a little more insight into Chase’s decision to end the series to go quickly and preference will be the way he did — something many given to museum members, who were allowed to purchase theirs on have waited seven years to hear. Chase was previously at the muse- Tuesday. Nonmember tickets went Q um in November 2012 for a screening on sale on Thursday.

An evening with David Chase