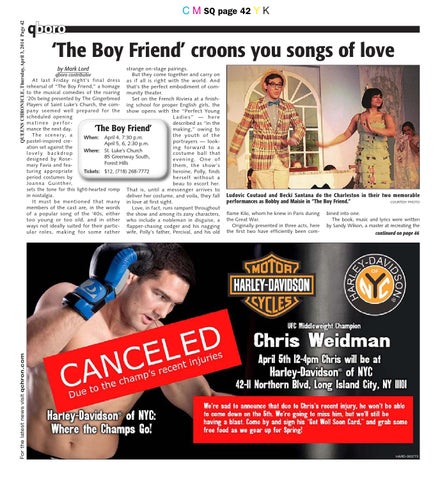 ‘The Boy Friend’ croons you songs of love by Mark Lord

strange on-stage pairings. But they come together and carry on At la s t Fr iday night ’s f ina l dress as if all is right with the world. And rehearsal of “The Boy Friend,” a homage that’s the perfect embodiment of comto the musical comedies of the roaring munity theater. ’20s being presented by The Gingerbread Set on the French Riviera at a finishPlayers of Saint Luke’s Church, the com- ing school for proper English girls, the pany seemed well prepared for the show opens with the “Perfect Young scheduled opening L adi e s” — h ere m a t i n e e p e r f o rdescribed as “in the mance the next day. making,” owing to T h e s c e n e r y, a t he yout h of t he When: April 4, 7:30 p.m. pastel-inspired creportrayers — lookApril 5, 6, 2:30 p.m. ation set against the ing for wa rd to a Where: St. Luke’s Church lovely backdrop costume ball that 85 Greenway South, designed by Rosee ve n i ng. O n e o f Forest Hills mary Favia and feathem, the show’s turing appropriate Tickets: $12, (718) 268-7772 heroine, Polly, finds period costumes by her self without a J o a n n a G u i n t h e r, beau to escort her. sets the tone for this light-hearted romp That is, until a messenger arrives to in nostalgia. deliver her costume, and voila, they fall It must be mentioned that many in love at first sight. members of the cast are, in the words Love, in fact, runs rampant throughout of a popular song of the ’40s, either the show and among its zany characters, too young or too old, and in other who include a nobleman in disguise, a ways not ideally suited for their partic- flapper-chasing codger and his nagging ular roles, making for some rather wife, Polly’s father, Percival, and his old qboro contributor

Ludovic Coutaud and Becki Santana do the Charleston in their two memorable COURTESY PHOTO performances as Bobby and Maisie in “The Boy Friend.” flame Kiki, whom he knew in Paris during the Great War. Originally presented in three acts, here the first two have efficiently been com-

bined into one. The book, music and lyrics were written by Sandy Wilson, a master at recreating the continued on on page page 46 00 continued