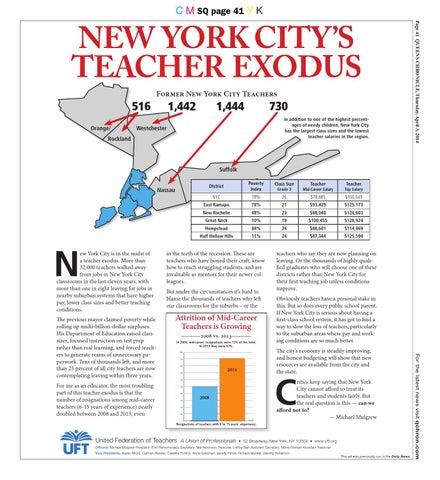 730 In addition to one of the highest percentages of needy children, New York City has the largest class sizes and the lowest teacher salaries in the region.

ew York City is in the midst of a teacher exodus. More than 32,000 teachers walked away from jobs in New York City classrooms in the last eleven years, with more than one in eight leaving for jobs in nearby suburban systems that have higher pay, lower class sizes and better teaching conditions.

in the teeth of the recession. These are teachers who have honed their craft, know how to reach struggling students, and are invaluable as mentors for their newer colleagues. But under the circumstances it’s hard to blame the thousands of teachers who left our classrooms for the suburbs – or the

teachers who say they are now planning on leaving. Or the thousands of highly qualified graduates who will choose one of these districts rather than New York City for their first teaching job unless conditions improve. Obviously teachers have a personal stake in this. But so does every public school parent. If New York City is serious about having a first-class school system, it has got to find a way to slow the loss of teachers, particularly to the suburban areas where pay and working conditions are so much better. The city’s economy is steadily improving, and honest budgeting will show that new resources are available from the city and the state.

ritics keep saying that New York City cannot afford to treat its teachers and students fairly. But the real question is this — can we afford not to? — Michael Mulgrew

For me as an educator, the most troubling part of this teacher exodus is that the number of resignations among mid-career teachers (6-15 years of experience) nearly doubled between 2008 and 2013, even

Resignations ons off teachers with h 6 to 15 years’ exper experience.

United Federation of Teachers A Union of Professionals

This ad was previously run in the Daily News.

The previous mayor claimed poverty while rolling up multi-billion-dollar surpluses. His Department of Education raised class sizes, focused instruction on test prep rather than real learning, and forced teachers to generate reams of unnecessary paperwork. Tens of thousands left, and more than 25 percent of all city teachers are now contemplating leaving within three years.