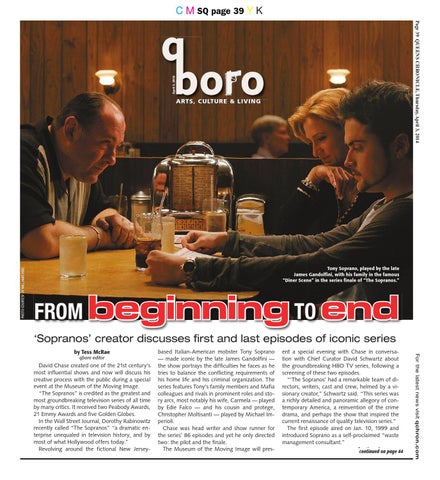 PHOTO COURTESY OF WILL HART/HBO

Tony Soprano, played by the late James Gandolfini, with his family in the famous “Diner Scene” in the series finale of “The Sopranos.”

David Chase created one of the 21st century’s most influential shows and now will discuss his creative process with the public during a special event at the Museum of the Moving Image. “The Sopranos” is credited as the greatest and most groundbreaking television series of all time by many critics. It received two Peabody Awards, 21 Emmy Awards and five Golden Globes. In the Wall Street Journal, Dorothy Rabinowitz recently called “The Sopranos” “a dramatic enterprise unequaled in television history, and by most of what Hollywood offers today.” Revolving around the fictional New Jersey-

based Italian-American mobster Tony Soprano — made iconic by the late James Gandolfini — the show portrays the difficulties he faces as he tries to balance the conflicting requirements of his home life and his criminal organization. The series features Tony’s family members and Mafia colleagues and rivals in prominent roles and story arcs, most notably his wife, Carmela — played by Edie Falco — and his cousin and protege, Christopher Moltisanti — played by Michael Imperioli. Chase was head writer and show runner for the series’ 86 episodes and yet he only directed two: the pilot and the finale. The Museum of the Moving Image will pres-

ent a special evening with Chase in conversation with Chief Curator David Schwartz about the groundbreaking HBO TV series, following a screening of these two episodes. “‘The Sopranos’ had a remarkable team of directors, writers, cast and crew, helmed by a visionary creator,” Schwartz said. “This series was a richly detailed and panoramic allegory of contemporary America, a reinvention of the crime drama, and perhaps the show that inspired the current renaissance of quality television series.” The first episode aired on Jan. 10, 1999 and introduced Soprano as a self-proclaimed “waste management consultant.” Continued onpage page44 continued on