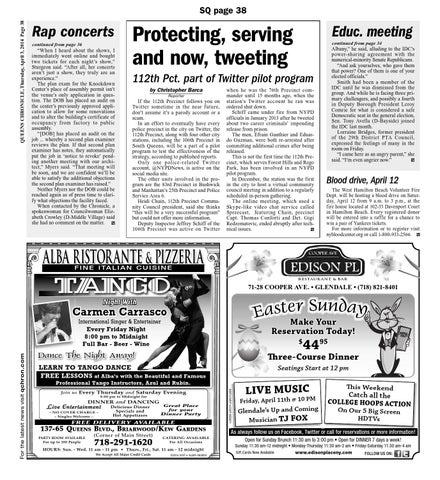 Rap concerts continued from page 36 “When I heard about the shows, I immediately went online and bought two tickets for each night’s show,” Sturgeon said. “After all, her concerts aren’t just a show, they truly are an experience.” The plan exam for the Knockdown Center’s place of assembly permit isn’t the venue’s only application in question. The DOB has placed an audit on the center’s previously approved application to allow for some renovations and to alter the building’s certificate of occupancy from factor y to public assembly. “[DOB] has placed an audit on the job ... whereby a second plan examiner reviews the plan. If that second plan examiner has notes, they automatically put the job in ‘notice to revoke’ pending another meeting with our architect,” Myers said. “That meeting will be soon, and we are confident we’ll be able to satisfy the additional objections the second plan examiner has raised.” Neither Myers nor the DOB could be reached again as of press time to clarify what objections the facility faced. When contacted by the Chronicle, a spokeswoman for Councilwoman Elizabeth Crowley (D-Middle Village) said she had no comment on the matter. Q

continued from page 34 Albany,” he said, alluding to the IDC’s power-sharing agreement with the numerical-minority Senate Republicans. “And ask yourselves, who gave them that power? One of them is one of your elected officials.” Smith had been a member of the IDC until he was dismissed from the group. And while he is facing three primary challengers, and possibly a fourth in Deputy Borough President Leroy Comrie for what is considered a safe Democratic seat in the general election, Sen. Tony Avella (D-Bayside) joined the IDC last month. Lorraine Bridges, former president of the 29th District PTA Council, expressed the feelings of many in the room on Friday. “I came here as an angry parent,” she Q said. “I’m even angrier now.”

If the 112th Precinct follows you on Twitter sometime in the near future, don’t assume it’s a parody account or a scam. In an effort to eventually have every police precinct in the city on Twitter, the 112th Precinct, along with four other city stations, including the 106th Precinct in South Queens, will be a part of a pilot program to test the effectiveness of the strategy, according to published reports. O n ly one police-related Twit ter account, @NYPDNews, is active on the social media site. The other units involved in the program are the 83rd Precinct in Bushwick and Manhattan’s 25th Precinct and Police Service Area 6. Heidi Chain, 112th Precinct Community Council president, said she thinks “this will be a very successful program” but could not offer more information. Deputy Inspector Jeffrey Schiff of the 106th Precinct was active on Twitter

when he was the 76th Precinct commander until 15 months ago, when the station’s Twitter account he ran was ordered shut down. Schiff came under fire from NYPD officials in January 2013 after he tweeted about two career criminals’ impending release from prison. The men, Efrain Gauthier and Eduardo Guzman, were both re-arrested after committing additional crimes after being released. This is not the first time the 112th Precinct, which serves Forest Hills and Rego Park, has been involved in an NYPD pilot program. In December, the station was the first in the city to host a virtual community council meeting in addition to a regularly scheduled in-person gathering. The online meeting, which used a Skype-like video chat service called Spreecast, featuring Chain, precinct Capt. Thomas Conforti and Det. Gigi Redzematovic, ended abruptly after techQ nical issues.

Blood drive, April 12 The West Hamilton Beach Volunteer Fire Dept. will be hosting a blood drive on Saturday, April 12 from 9 a.m. to 3 p.m., at the fire house located at 102-33 Davenport Court in Hamilton Beach. Every registered donor will be entered into a raffle for a chance to win a pair of Yankees tickets. For more information or to register visit nybloodcenter.org or call 1-800-933-2566. Q

Dance The Night Away!

LEARN TO TANGO DANCE FREE LESSONS at Alba’s with the Beautiful and Famous Professional Tango Instructors, Azul and Rubin. JJoin i us E Every Th Thursday d and d S Saturday t d Evening E i 8: 00 pm to Midnight for

Great Place for your Dinner Party

CATERING AVAILABLE For All Occasions