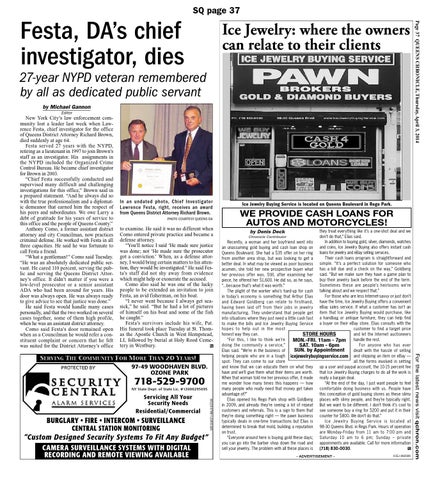 New York City’s law enforcement community lost a leader last week when Lawrence Festa, chief investigator for the office of Queens District Attorney Richard Brown, died suddenly at age 64. Festa served 27 years with the NYPD, retiring as a lieutenant in 1997 to join Brown’s staff as an investigator. His assignments in the NYPD included the Organized Crime Control Bureau. He became chief investigator for Brown in 2003. “Chief Festa successfully conducted and supervised many difficult and challenging investigations for this office,” Brown said in a prepared statement. “And he always did so with the true professionalism and a diplomatic demeanor that earned him the respect of his peers and subordinates. We owe Larry a debt of gratitude for his years of service to this office and the people of Queens County.” Anthony Como, a former assistant district attorney and city Councilman, now practices criminal defense. He worked with Festa in all three capacities. He said he was fortunate to call Festa a friend. “What a gentleman!” Como said Tuesday. “He was an absolutely dedicated public servant. He cared 110 percent, serving the public and serving the Queens District Attorney’s office. It didn’t matter if you were a low-level prosecutor or a senior assistant ADA who had been around for years. His door was always open. He was always ready to give advice to see that justice was done.” He said Festa would handle many cases personally, and that the two worked on several cases together, some of them high profile, when he was an assistant district attorney. Como said Festa’s door remained open when as a Councilman he would refer a constituent complaint or concern that he felt was suited for the District Attorney’s office

to examine. He said it was no different when Como entered private practice and became a defense attorney. “You’ll notice I said ‘He made sure justice was done; not ‘He made sure the prosecutor got a conviction.’ When, as a defense attorney, I would bring certain matters to his attention, they would be investigated.” He said Festa’s staff did not shy away from evidence which might help or exonerate the accused. Como also said he was one of the lucky people to be extended an invitation to join Festa, an avid fisherman, on his boat. “I never went because I always get seasick,” he said. “But he had a lot of pictures of himself on his boat and some of the fish he caught.” Festa’s survivors include his wife, Pat. His funeral took place Tuesday at St. Thomas the Apostle Church in West Hempstead, LI, followed by burial at Holy Rood CemeQ tery in Westbury.

718-529-9700 Servicing All Your Security Needs Residential/Commercial

WE PROVIDE CASH LOANS FOR AUTOS AND MOTORCYCLES! they treat everything like it’s a one-shot deal and we don’t do that,” Elias said. In addition to buying gold, silver, diamonds, watches Recently, a woman and her boyfriend went into and coins, Ice Jewelry Buying also offers instant cash an unassuming gold buying and cash loan shop on loans for jewelry and eBay selling services. Queens Boulevard. She had a $35 offer on her ring Their cash loans program is straightforward and from another area shop, but was looking to get a simple. “It’s a perfect solution for someone who better deal. In what may be viewed as poor business has a bill due and a check on the way,” Goldberg acumen, she told her new prospective buyer what said. “But we make sure they have a game plan to her previous offer was. Still, after examining her buy their jewelry back before the end of the term. piece, he offered her $1,600. He did so, as he says, Sometimes these are people’s heirlooms we’re “...because that’s what it was worth.” talking about and we respect that.” The plight of the worker who’s hard-up for cash For those who are less Internet-savvy or just don’t in today’s economy is something that Arthur Elias have the time, Ice Jewelry Buying offers a convenient and Edward Goldberg can relate to firsthand, eBay sales service. If what a customer has isn’t an having been laid off from their jobs in jewelry item that Ice Jewelry Buying would purchase, like manufacturing. They understand that people get a handbag or antique furniture, they can help find into situations where they just need a little cash fast a buyer on their eBay store. Elias consults with the to make the bills and Ice Jewelry Buying Service customer to find a target price hopes to help out in the most STORE HOURS and let the Internet auctioneers honest way they can. handle the rest. “For this, I like to think we’re MON.-FRI. 11am - 7pm For anyone who has ever doing the community a service,” SAT. 10am - 6pm SUN. by Appointment dealt with the hassle of selling Elias said. “We’re in the business of helping people who are in a tough icejewelrybuyingservice.com and shipping an item on eBay — all the forms involved in setting spot. They can come to our store up a user and paypal account, the 10-15 percent fee and know that we can educate them on what they that Ice Jewelry Buying charges to do all the work is have and we’ll give them what their items are worth. really a bargain deal. When that woman told me her previous offer, it made “At the end of the day, I just want people to feel me wonder how many times this happens — how comfortable doing business with us. People have many people who really need that money get taken this conception of gold buying stores as these slimy advantage of?” places with slimy people, and they’re typically right. Elias opened his Rego Park shop with Goldberg But we want to be different. I don’t think it’s cool to in 2009, and already they’re seeing a lot of repeat see someone buy a ring for $200 and put it in their customers and referrals. This is a sign to them that counter for $800. We don’t do that.” they’re doing something right — the pawn business Ice Jewelr y Buying Ser vice is located at typically deals in one-time transactions but Elias is 98-30 Queens Blvd. in Rego Park. Hours of operation determined to break that mold, building a reputation are Monday-Friday from 11 am to 7:00 pm and on trust. Saturday 10 am to 6 pm; Sunday – private “Everyone around here is buying gold these days; appoinments are available. Call for more information you can go into the barber shop down the road and Q (718) 830-0030. sell your jewelry. The problem with all these places is

SERVING THE C OMMUNITY FOR MORE THAN 20 YEARS!

Ice Jewelry: where the owners can relate to their clients