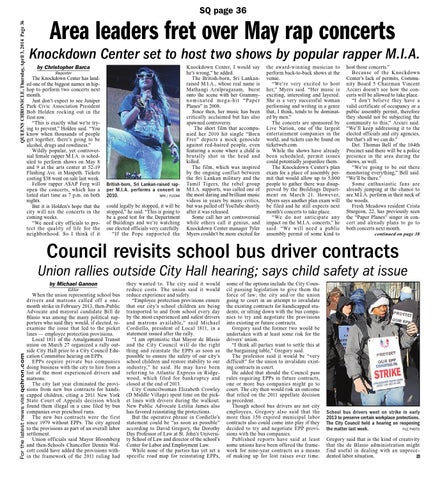 The Knockdown Center has landed one of the biggest names in hiphop to perform two concerts next month. Just don’t expect to see Juniper Park Civic Association President Bob Holden rocking out in the first row. “This is exactly what we’re trying to prevent,” Holden said. “You know when thousands of people get together, there’s going to be alcohol, drugs and rowdiness.” Wildly popular, yet controversial female rapper M.I.A. is scheduled to perform shows on May 8 and 9 at the arts center at 52-19 Flushing Ave. in Maspeth. Tickets costing $38 went on sale last week. Fellow rapper A$AP Ferg will open the concerts, which has a listed start time as 7 p.m. on both nights. But it is Holden’s hope that the city will nix the concerts in the coming weeks. “We need city officials to protect the quality of life for the neighborhood. So I think if it

British-born, Sri Lankan-raised rapper M.I.A. performs a concert in NPK / FLICKR 2010. could legally be stopped, it will be stopped,” he said. “This is going to be a good test for the Department of Buildings and we’re watching our elected officials very carefully. “If the Pope suppor ted the

Knockdown Center, I would say he’s wrong,” he added. The British-born, Sri Lankanraised M.I.A., whose real name is Mathangi Arulpragasam, burst onto the scene with her Grammyn o m i n a t e d m e g a - h it “ Pa p e r Planes” in 2008. Since then, her music has been critically acclaimed but has also spawned controversy. The short film that accompanied her 2010 hit single “Born Free” depicts a mock genocide against red-haired people, even featuring a scene where a child is br utally shot in the head and killed. The film, which was inspired by the ongoing conflict between the Sri Lankan military and the Tamil Tigers, the rebel group M.I.A. supports, was called one of the most daring and brilliant music videos in years by many critics, but was pulled off YouTube shortly after it was released. Some call her art controversial while others call it genius, and Knockdown Center manager Tyler Myers couldn’t be more excited for

the award-winning musician to perform back-to-back shows at the venue. “We’re very excited to host her,” Myers said. “Her music is exciting, interesting and layered. She is a very successful woman performing and writing in a genre that, I think, tends to be dominated by men.” The concerts are sponsored by Live Nation, one of the largest entertainment companies in the world, and tickets can be found on ticketweb.com. While the shows have already been scheduled, permit issues could potentially jeopardize them. The Knockdown Center’s plan exam for a place of assembly permit that would allow up to 5,000 people to gather there was disapproved by the Buildings Department on March 21. However, Myers says another plan exam will be filed and he still expects next month’s concerts to take place. “We do not anticipate any impact on the M.I.A. concerts,” he said. “We will need a public assembly permit of some kind to

host those concerts.” Because of the K nockdown Center’s lack of permits, Community Board 5 Chairman Vincent Arcuri doesn’t see how the concerts will be allowed to take place. “I don’t believe they have a valid certificate of occupancy or a public assembly permit, therefore they should not be subjecting the community to this,” Arcuri said. “We’ll keep addressing it to the elected officials and city agencies, but that’s all we can do.” Det. Thomas Bell of the 104th Precinct said there will be a police presence in the area during the shows, as well. “We’re going to be out there monitoring everything,” Bell said. “We’ll be there.” Some enthusiastic fans are already jumping at the chance to see M.I.A. perform in their neck of the woods. Fresh Meadows resident Crista Sturgeon, 22, has previously seen the “Paper Planes” singer in concert and already plans to go to both concerts next month. continued on page 38

When the union representing school bus drivers and matrons called off a onemonth strike in February 2013, then-Public Advocate and mayoral candidate Bill de Blasio was among the many political supporters who said they would, if elected, reexamine the issue that led to the picket lines — employee protection provisions. Local 1811 of the Amalgamated Transit union on March 27 organized a rally outside City Hall prior to a City Council Education Committee hearing on EPPs. EPPs require private bus companies doing business with the city to hire from a list of the most experienced drivers and matrons. The city last year eliminated the provisions from new bus contracts for handicapped children, citing a 2011 New York State Court of Appeals decision which found them illegal in a case filed by bus companies over preschool runs. The new bus contracts were the first since 1979 without EPPs. The city agreed to the provisions as part of an overall labor settlement. Union officials said Mayor Bloomberg and then-Schools Chancellor Dennis Walcott could have added the provisions within the framework of the 2011 ruling had

they wanted to. The city said it would reduce costs. The union said it would reduce experience and safety. “Employee protection provisions ensure that our city’s school children are being transported to and from school every day by the most experienced and safest drivers and mat rons available,” said Michael Cordiello, president of Local 1811, in a statement issued after the rally. “I am optimistic that Mayor de Blasio and the City Council will do the right thing and reinstate the EPPs as soon as possible to ensure the safety of our city’s school children and restore stability to our industr y,” he said. He may have been referring to Atlantic Express in Ridgewood, which f iled for bankr uptcy and closed at the end of 2013. City Councilwoman Elizabeth Crowley (D Middle Village) spent time on the picket lines with drivers during the walkout. New Public Advocate Letitia James also has favored reinstating the protections. But the operative phrase in Cordiello’s statement could be “as soon as possible” according to David Gregory, the Dorothy Day Professor of Law at St. John’s University School of Law and director of the school’s Center for Labor and Employment Law. While none of the parties has yet set a specific road map for reinstating EPPs,

some of the options include the City Council passing legislation to give them the force of law; the city and /or the union going to court in an attempt to invalidate the existing contracts for handicapped students; or sitting down with the bus companies to try and negotiate the provisions into existing or future contracts. Gregory said the former two would be undertaken with at least some risk for the drivers’ union. “I think all parties want to settle this at the bargaining table,” Gregory said. The professor said it would be “very difficult” for the union to invalidate existing contracts in court. He added that should the Council pass rules requiring EPPs in future contracts, one or more bus companies might go to court. The city then would risk an outcome that relied on the 2011 appellate decision as precedent. Though school bus drivers are not city employees, Gregor y also said that the more than 150 expired municipal labor contracts also could come into play if they decided to try and negotiate EPP provisions with the bus companies. Published repor ts have said at least some unions have been offered the framework for nine-year contracts as a means of making up for lost raises over time.

School bus drivers went on strike in early 2013 to preserve certain workplace protections. The City Council held a hearing on reopening FILE PHOTO the matter last week. Gregory said that is the kind of creativity that the de Blasio administration might find useful in dealing with an unpreceQ dented labor situation.