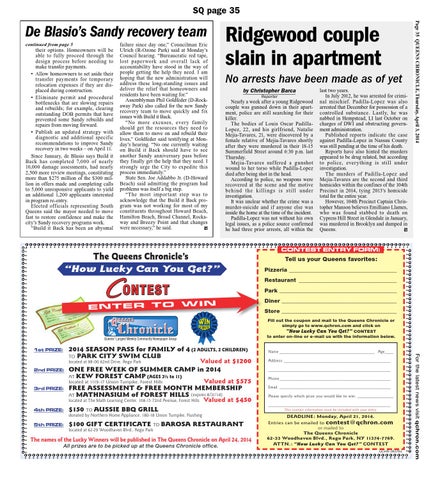 continued from page 5 their options. Homeowners will be able to fully proceed through the design process before needing to make transfer payments. • Allow homeowners to set aside their transfer payments for temporary relocation expenses if they are displaced during construction. • Eliminate permit and procedural bottlenecks that are slowing repairs and rebuilds; for example, clearing outstanding DOB permits that have prevented some Sandy rebuilds and repairs from moving forward. • Publish an updated strategy with diagnostic and additional specific recommendations to improve Sandy recovery in two weeks – on April 11. Since January, de Blasio says Build it Back has completed 7,000 of nearly 10,000 damage assessments, had nearly 2,500 more review meetings, constituting more than $275 million of the $300 million in offers made and completing calls to 5,000 unresponsive applicants to yield an additional 1,200 applicants interested in program re-entry. Elected officials representing South Queens said the mayor needed to move fast to restore confidence and make the city’s Sandy recovery programs work. “Build it Back has been an abysmal

failure since day one,” Councilman Eric Ulrich (R-Ozone Park) said at Monday’s Council hearing. “Bureaucratic red tape, lost paper work and overall lack of accountability have stood in the way of people getting the help they need. I am hoping that the new administration will address these long-standing issues and deliver the relief that homeowners and residents have been waiting for.” Assemblyman Phil Goldfeder (D-Rockaway Park) also called for the new Sandy recovery team to move quickly and fix issues with Build it Back. “No more excuses, ever y family should get the resources they need to allow them to move on and rebuild their lives,” Goldfeder said testifying at Monday’s hearing. “No one currently waiting on Build it Back should have to see another Sandy anniversary pass before they finally get the help that they need. I strongly urge the City to expedite this process immediately.” State Sen. Joe Addabbo Jr. (D-Howard Beach) said admitting the program had problems was itself a big step. “The most important step was to acknowledge that the Build it Back program was not working for most of my constituents throughout Howard Beach, Hamilton Beach, Broad Channel, Rockaway and Breezy Point and that changes Q were necessary,” he said.

Nearly a week after a young Ridgewood couple was gunned down in their apartment, police are still searching for their killer. The bodies of Louis Oscar PadillaLopez, 22, and his girlfriend, Natalie Mejia-Tavares, 21, were discovered by a female relative of Mejia-Tavares shortly after they were murdered in their 18-15 Summerfield Street around 6:30 p.m. last Thursday. Mejia-Tavares suffered a gunshot wound to her torso while Padilla-Lopez died after being shot in the head. According to police, no weapons were recovered at the scene and the motive beh i nd the k illi ngs is st ill u nder investigation. It was unclear whether the crime was a murder-suicide and if anyone else was inside the home at the time of the incident. Padilla-Lopez was not without his own legal issues, as a police source confirmed he had three prior arrests, all within the

last two years. In July 2012, he was arrested for criminal mischief. Padilla-Lopez was also arrested that December for possession of a controlled substance. Lastly, he was nabbed in Hempstead, LI last October on charges of DWI and obstructing government administration. Published reports indicate the case against Padilla-Lopez in Nassau County was still pending at the time of his death. Reports have also hinted the murders appeared to be drug related, but according to police, ever ything is still under investigation. The murders of Padilla-Lopez and Mejia-Tavares are the second and third homicides within the confines of the 104th Precinct in 2014, tying 2013’s homicide total for the entire year. However, 104th Precinct Captain Christopher Manson believes Emilliano Llames, who was found stabbed to death on Cypress Hill Street in Glendale in January, was murdered in Brooklyn and dumped in Q Queens.

The Queens Chronicle’s “How Lucky Can You Get?”