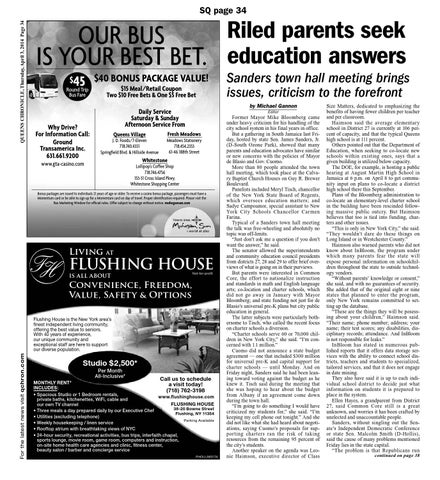 Riled parents seek OUR BUS IS YOUR BEST BET. education answers 45 Round Trip $

Bonus packages are issued to individuals 21 years of age or older. To receive a casino bonus package, passengers must have a Momentum card or be able to sign up for a Momentum card on day of travel. Proper identiﬁcation required. Please visit the Bus Marketing Window for ofﬁcial rules. Offer subject to change without notice. mohegansun.com

Call us to schedule

Former Mayor Mike Bloomberg came under heavy criticism for his handling of the city school system in his final years in office. But a gathering in South Jamaica last Friday, hosted by state Sen. James Sanders, Jr. (D-South Ozone Park), showed that many parents and education advocates have similar or new concerns with the policies of Mayor de Blasio and Gov. Cuomo. More than 80 people attended the town hall meeting, which took place at the Calvary Baptist Church Houses on Guy R. Brewer Boulevard. Panelists included Meryl Tisch, chancellor of the New York State Board of Regents, which oversees education matters; and Sadye Campoamor, special assistant to New York City Schools Chancellor Carmen Farina. Typical of a Sanders town hall meeting the talk was free-wheeling and absolutely no topic was off-limits. “Just don’t ask me a question if you don’t want the answer,” he said. The senator allowed the superintendents and community education council presidents from districts 27, 28 and 29 to offer brief overviews of what is going on in their purviews. But parents were interested in Common Core, the effort to nationalize instruction and standards in math and English language arts; co-location and charter schools, which did not go away in January with Mayor Bloomberg; and state funding not just for de Blasio’s universal pre-K plans but city public education in general. The latter subjects were particularly bothersome to Tisch, who called the recent focus on charter schools a diversion. “Charter schools serve 60 or 70,000 children in New York City,” she said. “I’m concerned with 1.1 million.” Cuomo did not announce a state budget agreement — one that included $300 million for universal pre-K and capital support for charter schools — until Monday. And on Friday night, Sanders said he had been leaning toward voting against the budget as he knew it. Tisch said during the meeting that she was hoping to hear about the budget from Albany if an agreement come down during the town hall. “I’m going to do something I would have criticized my students for,” she said. “I’m keeping my cell phone out tonight.” And she did not like what she had heard about negotiations, saying Cuomo’s proposals for supporting charters ran the risk of taking resources from the remaining 95 percent of the city’s students. Another speaker on the agenda was Leonie Haimson, executive director of Class

Size Matters, dedicated to emphasizing the benefits of having fewer children per teacher and per classroom. Haimson said the average elementary school in District 27 is currently at 106 percent of capacity, and that the typical Queens high school is at 111 percent. Others pointed out that the Department of Education, when seeking to co-locate new schools within existing ones, says that a given building is utilized below capacity. The DOE, for example, is hosting a public hearing at August Martin High School in Jamaica at 6 p.m. on April 8 to get community input on plans to co-locate a district high school there this September. Plans of the Bloomberg administration to co-locate an elementary-level charter school in the building have been rescinded following massive public outcry. But Haimson believes that too is tied into funding, charters and other issues. “This is only in New York City,” she said. “They wouldn’t dare do these things on Long Island or in Westchester County.” Haimson also warned parents who did not know about InBloom, the program under which many parents fear the state will expose personal information on schoolchildren throughout the state to outside technology vendors. “Without parents’ knowledge or consent,” she said, and with no guarantees of security. She added that of the original eight or nine states that planned to enter the program, only New York remains committed to setting up the database. “These are the things they will be posessing about your children,” Haimson said. “Their name; phone number; address; your name; their test scores; any disabilities, disciplinary records; attendance. And InBloom is not responsible for leaks.” InBloom has stated in numerous published reports that it offers data storage services with the ability to connect school districts, teachers and students to specialized, tailored services, and that it does not engage in date mining. They also have said it is up to each individual school district to decide just what information on students it is prepared to place in the system. Ellen Hayes, a grandparent from District 27, said Common Core still is a great unknown, and worries it has been crafted by unelected and unaccountable people. Sanders, without singling out the Senate’s Independent Democratic Conference or state Sen. Malcolm Smith (D-Hollis), said the cause of many problems mentioned Friday lies in the state capital. “The problem is that Republicans run continued on page 38