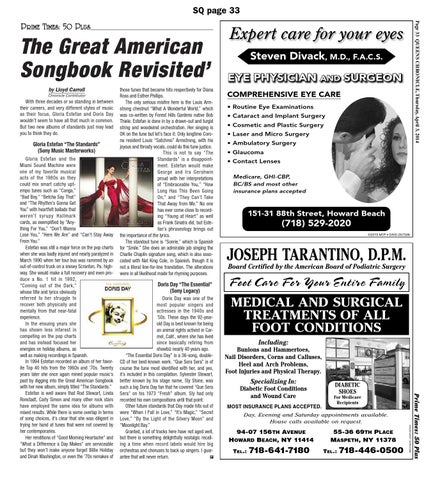 With three decades or so standing in between their careers, and very different styles of music as their focus, Gloria Estefan and Doris Day wouldn’t seem to have all that much in common. But two new albums of standards just may lead you to think they do.

Doris Day “The Essential” (Sony Legacy) Doris Day was one of the most popular singers and actresses in the 1940s and ’50s. These days the 92-yearold Day is best known for being an animal rights activist in Carmel, Calif., where she has lived since basically retiring from showbiz nearly 40 years ago. “The Essential Doris Day” is a 36-song, doubleCD of her best-known work. “Que Sera Sera” is of course the tune most identified with her, and yes, it’s included in this compilation. Sylvester Stewart, better known by his stage name, Sly Stone, was such a big Doris Day fan that he covered “Que Sera Sera” on his 1973 “Fresh” album. Sly had only recorded his own compositions until that point. Other future standards that Day made hits out of were “When I Fall in Love,” “It’s Magic,” “Secret Love,” “By the Light of the Silvery Moon” and “Moonlight Bay.” Granted, a lot of tracks here have not aged well, but there is something delightfully nostalgic recalling a time when record labels would hire big orchestras and choruses to back up singers. I guarP antee that will never return.

JOSEPH TARANTINO, D.P.M. Board Certified by the American Board of Podiatric Surgery

Foot Care For Your Entire Family MEDICAL AND SURGICAL TREATMENTS OF ALL FOOT CONDITIONS Including: Bunions and Hammertoes, Nail Disorders, Corns and Calluses, Heel and Arch Problems, Foot Injuries and Physical Therapy.

For the latest news visit qchron.com Prime Times: 50 Plus

Gloria Estefan and the Miami Sound Machine were one of my favorite musical acts of the 1980s as they could mix smart catchy uptempo tunes such as “Conga,” “Bad Boy,” “Betcha Say That” and “The Rhythm’s Gonna Get You” with heartfelt ballads that weren’t syrupy Hallmark cards, as exemplified by “Anything For You,” “Don’t Wanna Lose You,” “Here We Are” and “Can’t Stay Away From You.” Estefan was still a major force on the pop charts when she was badly injured and nearly paralyzed in March 1990 when her tour bus was rammed by an out-of-control truck on a snowy Scranton, Pa. highway. She would make a full recovery and even produce a No. 1 hit in 1992, “Coming out of the Dark,” whose title and lyrics obviously referred to her struggle to recover both physically and mentally from that near-fatal experience. In the ensuing years she has shown less interest in competing on the pop charts and has instead focused her energies on holiday albums, as well as making recordings in Spanish. In 1994 Estefan recorded an album of her favorite Top 40 hits from the 1960s and ’70s. Twenty years later she once again mined popular music’s past by digging into the Great American Songbook with her new album, simply titled “The Standards.” Estefan is well aware that Rod Stewart, Linda Ronstadt, Carly Simon and many other rock stars have employed the same idea for albums with mixed results. While there is some overlap in terms of song choices, it’s clear that she was diligent in trying her hand at tunes that were not covered by her contemporaries. Her renditions of “Good Morning Heartache” and “What a Difference a Day Makes” are serviceable but they won’t make anyone forget Billie Holiday and Dinah Washington, or even the ’70s remakes of

those tunes that became hits respectively for Diana Ross and Esther Phillips. The only serious misfire here is the Louis Armstrong chestnut “What A Wonderful World,” which was co-written by Forest Hills Gardens native Bob Thiele. Estefan is done in by a drawn-out and turgid string and woodwind orchestration. Her singing is OK on the tune but let’s face it: Only longtime Corona resident Louis “Satchmo” Armstrong, with his joyous and throaty vocals, could do this tune justice. This is not to say “The Standards” is a disappointment. Estefan would make George and Ira Gershwin proud with her interpretations of “Embraceable You,” “How Long Has This Been Going On,” and “They Can’t Take That Away from Me.” No one has ever come close to recording “Young at Heart” as well as Frank Sinatra did, but Estefan’s phraseology brings out the importance of the lyrics. The standout tune is “Sonrie,” which is Spanish for “Smile.” She does an admirable job singing the Charlie Chaplin signature song, which is also associated with Nat King Cole, in Spanish, though it is not a literal line-for-line translation. The alterations were in all likelihood made for rhyming purposes.

Expert care for your eyes