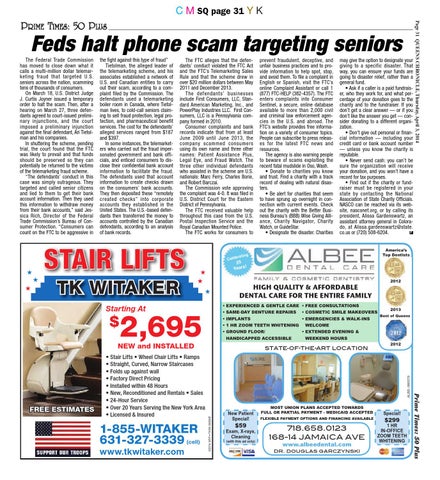 Feds halt phone scam targeting seniors The Federal Trade Commission has moved to close down what it calls a multi-million dollar telemarketing fraud that targeted U.S. seniors across the nation, scamming tens of thousands of consumers. On March 18, U.S. District Judge J. Curtis Joyner issued a temporary order to halt the scam. Then, after a hearing on March 27, three defendants agreed to court-issued preliminary injunctions, and the court imposed a preliminary injunction against the final defendant, Ari Tietolman and his companies. In shuttering the scheme, pending trial, the court found that the FTC was likely to prevail and that funds should be preserved so they can potentially be returned to the victims of the telemarketing fraud scheme. â&#x20AC;&#x153;The defendantsâ&#x20AC;&#x2122; conduct in this case was simply outrageous. They targeted and called senior citizens and lied to them to get their bank account information. Then they used this information to withdraw money from their bank accounts,â&#x20AC;? said Jessica Rich, Director of the Federal Trade Commissionâ&#x20AC;&#x2122;s Bureau of Consumer Protection. â&#x20AC;&#x153;Consumers can count on the FTC to be aggressive in

The FTC alleges that the defendantsâ&#x20AC;&#x2122; conduct violated the FTC Act and the FTCâ&#x20AC;&#x2122;s Telemarketing Sales Rule and that the scheme drew in over $20 million dollars between May 2011 and December 2013. The defendantsâ&#x20AC;&#x2122; businesses include First Consumers, LLC, Standard American Marketing, Inc., and PowerPlay Industries LLC. First Consumers, LLC is a Pennsylvania company formed in 2010. Consumer complaints and bank records indicate that from at least June 2009 until June 2013, the company scammed consumers using its own name and three other names: Patient Assistance Plus, Legal Eye, and Fraud Watch. The three other individual defendants who assisted in the scheme are U.S. nationals: Marc Ferry, Charles Borie, and Robert Barczai. The Commission vote approving the complaint was 4-0. It was filed in U.S. District Court for the Eastern District of Pennsylvania. The FTC received valuable help throughout this case from the U.S. Postal Inspection Service and the Royal Canadian Mounted Police. The FTC works for consumers to

the fight against this type of fraudâ&#x20AC;? Tietolman, the alleged leader of the telemarketing scheme, and his associates established a network of U.S. and Canadian entities to carry out their scam, according to a complaint filed by the Commission. The defendants used a telemarketing boiler room in Canada, where Tietolman lives, to cold-call seniors claiming to sell fraud protection, legal protection, and pharmaceutical benefit services. The cost for the defendantsâ&#x20AC;&#x2122; alleged services ranged from $187 and $397. In some instances, the telemarketers who carried out the fraud impersonated government and bank officials, and enticed consumers to disclose their confidential bank account information to facilitate the fraud. The defendants used that account information to create checks drawn on the consumersâ&#x20AC;&#x2122; bank accounts. They then deposited these â&#x20AC;&#x153;remotely created checksâ&#x20AC;? into corporate accounts they established in the United States. The U.S.-based defendants then transferred the money to accounts controlled by the Canadian defendants, according to an analysis of bank records.

state of the art location

For the latest news visit qchron.com Prime Times: 50 Plus

prevent fraudulent, deceptive, and unfair business practices and to provide information to help spot, stop, and avoid them. To file a complaint in English or Spanish, visit the FTCâ&#x20AC;&#x2122;s online Complaint Assistant or call 1 (877) FTC-HELP (382-4357). The FTC enters complaints into Consumer Sentinel, a secure, online database available to more than 2,000 civil and criminal law enforcement agencies in the U.S. and abroad. The FTCâ&#x20AC;&#x2122;s website provides free information on a variety of consumer topics. People can subscribe to press releases for the latest FTC news and resources. The agency is also warning people to beware of scams exploiting the recent fatal mudslide in Oso, Wash. â&#x20AC;˘ Donate to charities you know and trust. Find a charity with a track record of dealing with natural disasters. â&#x20AC;˘ Be alert for charities that seem to have sprung up overnight in connection with current events. Check out the charity with the Better Business Bureauâ&#x20AC;&#x2122;s (BBB) Wise Giving Alliance, Charity Navigator, Charity Watch, or GuideStar. â&#x20AC;˘ Designate the disaster. Charities