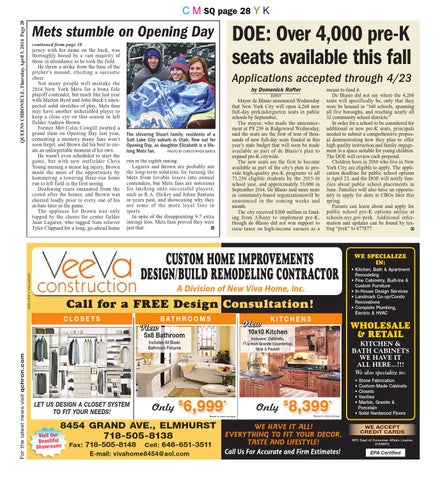 Mets stumble on Opening Day continued from page 18 jersey with his name on the back, was thoroughly booed by a vast majority of those in attendance as he took the field. He threw a strike from the base of the pitcher’s mound, eliciting a sarcastic cheer. Not many people will mistake the 2014 New York Mets for a bona fide playoff contender, but much like last year with Marlon Byrd and John Buck’s unexpected solid stretches of play, Mets fans may have another unheralded player to keep a close eye on this season in left fielder Andrew Brown. Former Met Colin Cowgill swatted a grand slam on Opening Day last year, cementing a memory many fans won’t soon forget, and Brown did his best to create an unforgettable moment of his own. He wasn’t even scheduled to start the game, but with new outfielder Chris Young nursing a minor leg injury, Brown made the most of the opportunity by hammering a towering three-run home run to left field in the first inning. Deafening roars emanated from the crowd after the homer, and Brown was cheered loudly prior to every one of his at-bats later in the game. The applause for Brown was only topped by the cheers for center fielder Juan Lagares, who tagged Nats reliever Tyler Clippard for a long, go-ahead home

Mayor de Blasio announced Wednesday that New York City will open 4,268 new full-day prekindergarten seats in public schools by September, The mayor, who made the announcement at PS 239 in Ridgewood Wednesday, said the seats are the first of tens of thousands of new full-day seats funded in this year’s state budget that will soon be made available as part of de Blasio’s plan to expand pre-K citywide. The new seats are the first to become available as part of the city’s plan to provide high-quality pre-K programs to all 73,250 eligible students by the 2015-16 school year, and approximately 53,000 in September 2014. De Blasio said more seats in community-based organizationswill be announced in the coming weeks and month. The city received $300 million in funding from Albany to implement pre-K, though de Blasio did not win support to raise taxes on high-income earners as a

The shivering Stuart family, residents of a Salt Lake City suburb in Utah, flew out for Opening Day, as daughter Elizabeth is a lifePHOTO BY CHRISTOPHER BARCA long Mets fan. run in the eighth inning. Lagares and Brown are probably not the long-term solutions for turning the Mets from lovable losers into annual contenders, but Mets fans are notorious for latching onto successful players, such as R.A. Dickey and Johan Santana in years past, and showcasing why they are some of the more loyal fans in sports. In spite of the disappointing 9-7 extra innings loss, Mets fans proved they were Q just that.

means to fund it. De Blasio did not say where the 4,268 seats will specifically be, only that they were be housed in “140 schools, spanning all five boroughs, and reaching nearly all 32 community school districts.” In order for a school to be considered for additional or new pre-K seats, principals needed to submit a comprehensive proposal demonstrating how they plan to offer high quality instruction and family engagement in a space suitable for young children. The DOE will review each proposal. Children born in 2010 who live in New York City are eligible to apply. The application deadline for public school options is April 23, and the DOE will notify families about public school placements in June. Families will also have an opportunity to apply for slots at CBOs later this spring. Parents can learn about and apply for public school pre-K options online at schools.nyc.gov/prek. Additional information and updates can be found by texQ ting “prek” to 877877.

KITCHEN & BATH CABINETS WE HAVE IT ALL HERE...!!! We also specialize in:

LET US DESIGN A CLOSET SYSTEM TO FIT YOUR NEEDS!

WE HAVE IT ALL! EVERYTHING TO FIT YOUR DECOR, TASTE AND LIFESTYLE! Call Us For Accurate and Firm Estimates!