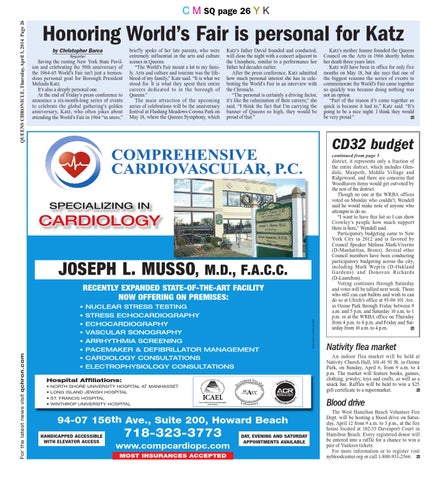 Saving the rusting New York State Pavilion and celebrating the 50th anniversary of the 1964-65 World’s Fair isn’t just a tremendous personal goal for Borough President Melinda Katz. It’s also a deeply personal one. At the end of Friday’s press conference to announce a six-month-long series of events to celebrate the global gathering’s golden anniversary, Katz, who often jokes about attending the World’s Fair in 1964 “in utero,”

briefly spoke of her late parents, who were extremely influential in the arts and culture scenes in Queens. “The World’s Fair meant a lot to my family. Arts and culture and tourism was the lifeblood of my family,” Katz said. “It is what we stood for. It is what they spent their entire careers dedicated to in the borough of Queens.” The main attraction of the upcoming series of celebrations will be the anniversary festival at Flushing Meadows Corona Park on May 18, where the Queens Symphony, which

Katz’s father David founded and conducted, will close the night with a concert adjacent to the Unisphere, similar to a performance her father led decades earlier. After the press conference, Katz admitted how much personal interest she has in celebrating the World’s Fair in an interview with the Chronicle. “The personal is certainly a driving factor, it’s like the culmination of their careers,” she said. “I think the fact that I’m carrying the banner of Queens so high, they would be proud of that.”

continued from page 5 district, it represents only a fraction of the entire district, which includes Glendale, Maspeth, Middle Village and Ridgewood, and there are concerns that Woodhaven items would get outvoted by the rest of the district. Though no one at the WRBA offices voted on Monday who couldn’t, Wendell said he would make note of anyone who attempts to do so. “I want to have this list so I can show Crowley’s people how much support there is here,” Wendell said. Participatory budgeting came to New York City in 2012 and is favored by Council Speaker Melissa Mark-Viverito (D-Manhatttan, Bronx). Several other Council members have been conducting participatory budgeting across the city, including Mark Weprin (D-Oakland Gardens) and Donovan R ichards (D-Laurelton). Voting continues through Saturday and votes will be tallied next week. Those who still can cast ballots and wish to can do so at Ulrich’s office at 93-06 101 Ave. in Ozone Park through Friday between 9 a.m. and 5 p.m. and Saturday 10 a.m. to 1 p.m. or at the WRBA office on Thursday from 4 p.m. to 8 p.m. and Friday and SatQ urday from 10 a.m. to 4 p.m.

Nativity flea market An indoor f lea market will be held at Nativity Church Hall, 101-41 91 St. in Ozone Park, on Sunday, April 6, from 9 a.m. to 4 p.m. The market will feature books, games, clothing, jewelry, toys and crafts, as well as a snack bar. Raffles will be held to win a $25 Q gift certificate to a supermarket.

Katz’s mother Jeanne founded the Queens Council on the Arts in 1966 shortly before her death three years later. Katz will have been in office for only five months on May 18, but she says that one of the biggest reasons the series of events to commemorate the World’s Fair came together so quickly was because doing nothing was not an option. “Part of the reason it’s come together so quick is because it had to,” Katz said. “It’s going to be a nice night. I think they would Q be very proud.”

The West Hamilton Beach Volunteer Fire Dept. will be hosting a blood drive on Saturday, April 12 from 9 a.m. to 3 p.m., at the fire house located at 102-33 Davenport Court in Hamilton Beach. Every registered donor will be entered into a raffle for a chance to win a pair of Yankees tickets. For more information or to register visit nybloodcenter.org or call 1-800-933-2566. Q