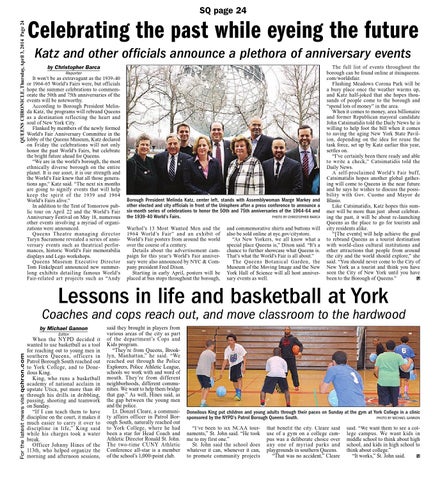 It won’t be as extravagant as the 1939-40 or 1964-65 World’s Fairs were, but officials hope the summer celebrations to commemorate the 50th and 75th anniversaries of the events will be noteworthy. According to Borough President Melinda Katz, the programs will rebrand Queens as a destination ref lecting the heart and soul of New York City. Flanked by members of the newly formed World’s Fair Anniversary Committee in the lobby of the Queens Museum, Katz declared on Friday the celebrations will not only honor the past World’s Fairs, but celebrate the bright future ahead for Queens. “We are in the world’s borough, the most ethnically diverse borough on the entire planet. It is our asset, it is our strength and the World’s Fair knew that all those generations ago,” Katz said. “The next six months are going to signify events that will help keep the spirit of the 1939 and 1964 World’s Fairs alive.” In addition to the Tent of Tomorrow public tour on April 22 and the World’s Fair Anniversary Festival on May 18, numerous other events involving a myriad of organizations were announced. Queens Theat re managing director Taryn Sacramone revealed a series of anniversary events such as theatrical performances, historic World’s Fair memorabilia displays and Lego workshops. Queens Museum Executive Director Tom Finkelpearl announced new summerlong exhibits detailing famous World’s Fair-related art projects such as “Andy

Borough President Melinda Katz, center left, stands with Assemblywoman Marge Markey and other elected and city officials in front of the Unisphere after a press conference to announce a six-month series of celebrations to honor the 50th and 75th anniversaries of the 1964-64 and PHOTO BY CHRISTOPHER BARCA the 1939-40 World’s Fairs. Warhol’s 13 Most Wanted Men and the 1964 World’s Fair” and an exhibit of World’s Fair posters from around the world over the course of a century. Details about the advertisement campaign for this year’s World’s Fair anniversary were also announced by NYC & Company president Fred Dixon. Starting in early April, posters will be placed at bus stops throughout the borough,

and commemorative shirts and buttons will also be sold online at nyc.gov/citystore. “As New Yorkers, we all know what a special place Queens is,” Dixon said. “It’s a chance to further showcase what Queens is. That’s what the World’s Fair is all about.” The Queens Botanical Garden, the Museum of the Moving Image and the New York Hall of Science will all host anniversary events as well.

The full list of events throughout the borough can be found online at itsinqueens. com/worldsfair. Flushing Meadows Corona Park will be a busy place once the weather warms up, and Katz half-joked that she hopes thousands of people come to the borough and “spend lots of money” in the area. When it comes to money, area billionaire and former Republican mayoral candidate John Catsimatidis told the Daily News he is willing to help foot the bill when it comes to saving the aging New York State Pavilion, depending on the idea for reuse the task force, set up by Katz earlier this year, settles on. “I’ve certainly been there ready and able to write a check,” Catsimatidis told the Daily News. A self-proclaimed World’s Fair buff, Catsimatidis hopes another global gathering will come to Queens in the near future and he says he wishes to discuss the possibility with Gov. Cuomo and Mayor de Blasio. Like Catsimatidis, Katz hopes this summer will be more than just about celebrating the past, it will be about re-launching Queens as the place to go for tourists and city residents alike. “[The events] will help achieve the goal to rebrand Queens as a tourist destination with world-class cultural institutions and other attractions that people from around the city and the world should explore,” she said. “You should never come to the City of New York as a tourist and think you have seen the City of New York until you have Q been to the Borough of Queens.”

Lessons in life and basketball at York Coaches and cops reach out, and move classroom to the hardwood by Michael Gannon

When the NYPD decided it wanted to use basketball as a tool for reaching out to young men in souther n Queens, off icers in Patrol Borough South reached out to York College, and to Doneilous King. King, who runs a basketball academy of national acclaim in upstate Utica, put more than 40 through his drills in dribbling, passing, shooting and teamwork on Sunday. “If I can teach them to have discipline on the court, it makes it much easier to carry it over to discipline in life,” King said while his charges took a water break. Officer Johnny Hines of the 113th, who helped organize the morning and afternoon sessions,

said they brought in players from various areas of the city as part of the department’s Cops and Kids program. “They’re from Queens, Brooklyn, Manhattan,” he said. “We reached out through the Police Explorers, Police Athletic League, schools we work with and word of mouth. They’re from different neighborhoods, different communities. We want to help them bridge that gap.” As well, Hines said, as the gap between the young men and the police. Lt. Donzel Cleare, a community affairs officer in Patrol Borough South, naturally reached out to York College, where he had been a star for Head Coach and Athletic Director Ronald St. John. The two-time CUNY Athletic Conference all-star is a member of the school’s 1,000-point club.

Doneilous King put children and young adults through their paces on Sunday at the gym at York College in a clinic PHOTO BY MICHAEL GANNON sponsored by the NYPD’s Patrol Borough Queens South. “I’ve been to six NCAA tournaments,” St. John said. “He took me to my first one.” St. John said the school does whatever it can, whenever it can, to promote community projects

that benefit the city. Cleare said use of a gym on a college campus was a deliberate choice over any one of myriad parks and playgrounds in southern Queens. “That was no accident,” Cleare