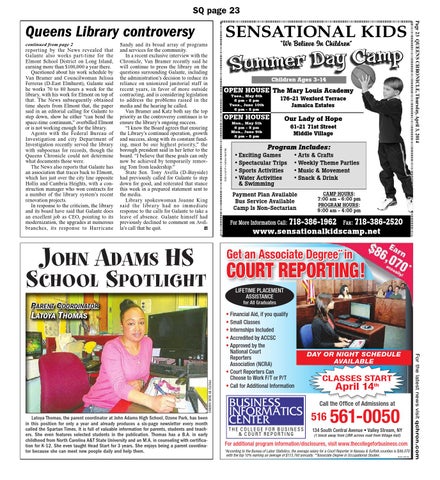 “We Believe In Children”

Sandy and its broad array of programs and services for the community. In a recent exclusive interview with the Chronicle, Van Bramer recently said he will continue to press the library on the questions surrounding Galante, including the administration’s decision to reduce its reliance on unionized janitorial staff in recent years, in favor of more outside contracting, and is considering legislation to address the problems raised in the media and the hearing he called. Van Bramer and Katz both say the top priority as the controversy continues is to ensure the library’s ongoing success. “I know the Board agrees that ensuring the Library’s continued operation, growth and success, along with its constant funding, must be our highest priority,” the borough president said in her letter to the board. “I believe that these goals can only now be achieved by temporarily removing Tom from leadership.” State Sen. Tony Avella (D-Bayside) had previously called for Galante to step down for good, and reiterated that stance this week in a prepared statement sent to the media. Library spokeswoman Joanne King said the librar y had no im mediate response to the calls for Galante to take a leave of absence. Galante himself had previously declined to comment on AvelQ la’s call that he quit.

Our Lady of Hope

Get an Associate Degree** in

For additional program information/disclosures, visit www.thecollegeforbusiness.com *According to the Bureau of Labor Statistics, the average salary for a Court Reporter in Nassau & Suffolk counties is $86,070 with the top 10% earning an average of $113,740 annually. **Associate Degree in Occupational Studies. BUSI-063763

Latoya Thomas, the parent coordinator at John Adams High School, Ozone Park, has been in this position for only a year and already produces a six-page newsletter every month called the Spartan Times. It is full of valuable information for parents, students and teachers. She even features selected students in the publication. Thomas has a B.A. in early childhood from North Carolina A&T State University and an M.A. in counseling with certification for K-12. She even taught Head Start for 3 years. She enjoys being a parent coordinator because she can meet new people daily and help them.

continued from page 2 reporting by the News revealed that Galante also works part-time for the Elmont School District on Long Island, earning more than $100,000 a year there. Questioned about his work schedule by Van Bramer and Councilwoman Julissa Ferreras (D-East Elmhurst), Galante said he works 70 to 80 hours a week for the library, with his work for Elmont on top of that. The News subsequently obtained time sheets from Elmont that, the paper said in an editorial calling for Galante to step down, show he either “can bend the space-time continuum,” overbilled Elmont or is not working enough for the library. Agents with the Federal Bureau of Investigation and city Department of Investigation recently served the library with subpoenas for records, though the Queens Chronicle could not determine what documents those were. The News also reports that Galante has an association that traces back to Elmont, which lies just over the city line opposite Hollis and Cambria Heights, with a construction manager who won contracts for a number of the library system’s recent renovation projects. In response to the criticism, the library and its board have said that Galante does an excellent job as CEO, pointing to its modernization, the upgrades at numerous branches, its response to Hur ricane