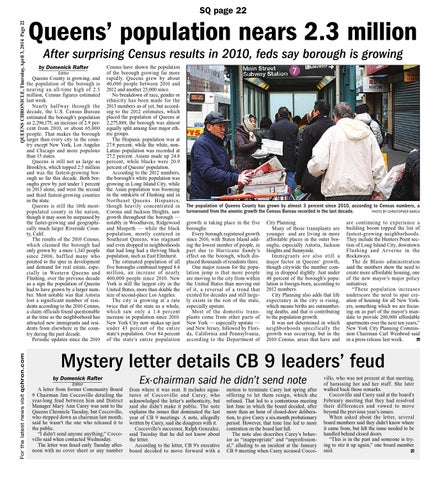 Queens County is growing, and the population of the borough is nearing an all-time high of 2.3 million, Census figures estimated last week. Nearly halfway through the decade, the U.S. Census Bureau estimated the borough’s population as 2,296,175, an increase of 2.9 percent from 2010, or about 65,000 people. That makes the borough larger than every city in the country except New York, Los Angeles and Chicago and more populous than 15 states. Queens is still not as large as Brooklyn, which topped 2.5 million and was the fastest-growing borough so far this decade. Both boroughs grew by just under 1 percent in 2013 alone, and were the second and third fastest-growing counties in the state. Queens is still the 10th mostpopulated county in the nation, though it may soon be surpassed by the faster-growing and geographically much larger Riverside County, Calif. The results of the 2010 Census, which claimed the borough had only grown by a mere 1,343 people since 2000, baff led many who pointed to the spur in development and demand for real estate, especially in Western Queens and Flushing, over the previous decade as a sign the population of Queens had to have grown by a larger number. Most notable was that Astoria lost a significant number of residents according to the 2010 Census, a claim officials found questionable at the time as the neighborhood has attracted new immigrants and residents from elsewhere in the country during the past decade. Periodic updates since the 2010

Census have shown the population of the borough growing far more rapidly. Queens grew by about 40,000 people between 2010 and 2012 and another 25,000 since. No breakdown of race, gender or ethnicity has been made for the 2013 numbers as of yet, but according to the 2012 estimates, which placed the population of Queens at 2,275,889, the borough was almost equally split among four major ethnic groups. The Hispanic population was at 27.9 percent, while the white, nonLatino population was recorded at 27.2 percent. Asians made up 24.8 percent, while blacks were 20.9 percent of Queens’ population. According to the 2012 numbers, the borough’s white population was growing in Long Island City, while the Asian population was booming in the outskirts of Flushing and in Nor theast Queens. Hispanics, though heavily concentrated in Corona and Jackson Heights, saw growth throughout the borough — notably in Woodhaven, Ridgewood and Maspeth — while the black population, mostly centered in Southeast Queens, was stagnant and even dropped in neighborhoods that had long had a thriving black population, such as East Elmhurst. The estimated population of all five boroughs combined topped 8.4 million, an increase of nearly 400,000 people since 2010. New York is still the largest city in the United States, more than double the size of second-place Los Angeles. The city is growing at a rate twice that of the state as a whole, which saw only a 1.4 percent increase in population since 2010. New York City now makes up just under 43 percent of the entire state’s population. Over 84 percent of the state’s entire population

The population of Queens County has grown by almost 3 percent since 2010, according to Census numbers, a PHOTO BY CHRISTOPHER BARCA turnaround from the anemic growth the Census Bureau recorded in the last decade. growth is taking place in the five boroughs. Every borough registered growth since 2010, with Staten Island adding the lowest number of people, in part due to Hurricane Sandy’s effect on the borough, which displaced thousands of residents there. One major reason for the population jump is that more people are moving to the city from within the United States than moving out of it, a reversal of a trend that existed for decades and still largely exists in the rest of the state, especially upstate. Most of the domestic transplants come from other parts of New York — especially upstate — and New Jersey, followed by Florida, California and Pennsylvania, according to the Department of

City Planning. Many of those transplants are younger and are living in more affordable places in the outer boroughs, especially Astoria, Jackson Heights and Sunnyside. Immigrants are also still a major factor in Queens’ growth, though citywide the number coming in dropped slightly. Just under 48 percent of the borough’s population is foreign-born, according to 2012 numbers. City Planning also adds that life expectancy in the city is rising, which means births are outnumbering deaths, and that is contributing to the population growth. It was not determined in which neighborhoods specifically the growth was occurring, but in the 2010 Census, areas that have and

are continuing to experience a building boom topped the list of fastest-growing neighborhoods. They include the Hunters Point section of Long Island City, downtown Flushing and A r ver ne in the Rockaways. The de Blasio administration said the numbers show the need to create more affordable housing, one of the new mayor’s major policy initiatives. “These population increases underscore the need to spur creation of housing for all New Yorkers, something which we are focusing on as part of the mayor’s mandate to provide 200,000 affordable apartments over the next ten years,” New York City Planning Commission Chairman Carl Weisbrod said Q in a press release last week.

A letter from former Community Board 9 Chairman Jim Coccovillo detailing the year-long feud between him and District Manager Mary Ann Carey was sent to the Queens Chronicle Tuesday, but Coccovillo, who stepped down as chairman last month, said he wasn’t the one who released it to the public. “I didn’t send anyone anything,” Coccovillo said when contacted Wednesday. The letter was faxed early Tuesday afternoon with no cover sheet or any number

Ex-chairman said he didn’t send note from where it was sent. It includes signatures of Coccovillo and Carey, who acknowledged the letter’s authenticity, but said she didn’t make it public. The note explains the issues that dominated the last year of CB 9 meetings. A note, allegedly written by Carey, said she disagrees with it. Coccovillo’s successor, Ralph Gonzalez, said Tuesday that he did not know about the letter. According to the letter, CB 9’s executive board decided to move forward with a

motion to terminate Carey last spring after offering to let them resign, which she refused. That led to a contentious meeting last June in which the board decided, after more than an hour of closed-door deliberation, to give Carey a six-month probationary period. However, that time line led to more contention on the board last fall. The note also describes Carey’s behavior as “inappropriate” and “unprofessional,” alluding to an incident at the January CB 9 meeting when Carey accused Cocco-

villo, who was not present at that meeting, of harassing her and her staff. She later walked back those remarks. Coccovillo and Carey said at the board’s February meeting that they had resolved their differences and vowed to move beyond the previous year’s issues. When asked about the letter, several board members said they didn’t know where it came from, but felt the issue needed to be handled behind closed doors. “This is in the past and someone is trying to stir it up again,” one board member Q said.