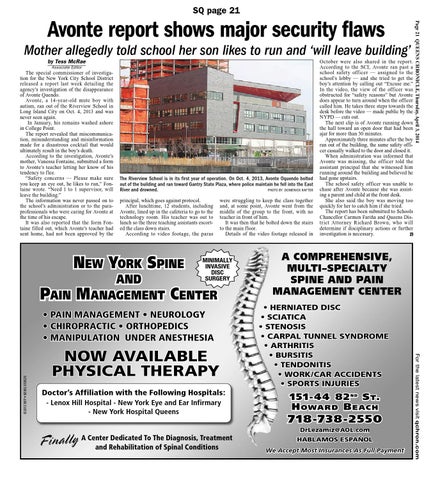 The special commissioner of investigation for the New York City School District released a report last week detailing the agency’s investigation of the disappearance of Avonte Quendo. Avonte, a 14-year-old mute boy with autism, ran out of the Riverview School in Long Island City on Oct. 4, 2013 and was never seen again. In January, his remains washed ashore in College Point. The report revealed that miscommunication, misunderstanding and misinformation made for a disastrous cocktail that would ultimately result in the boy’s death. According to the investigation, Avonte’s mother, Vanessa Fontaine, submitted a form to Avonte’s teacher letting her know of his tendency to flee. “Safety concerns — Please make sure you keep an eye out, he likes to run,” Fontaine wrote. “Need 1 to 1 supervisor, will leave the building.” The information was never passed on to the school’s administration or to the paraprofessionals who were caring for Avonte at the time of his escape. It was also reported that the form Fontaine filled out, which Avonte’s teacher had sent home, had not been approved by the

The Riverview School is in its first year of operation. On Oct. 4, 2013, Avonte Oquendo bolted out of the building and ran toward Gantry State Plaza, where police maintain he fell into the East PHOTO BY DOMENICK RAFTER River and drowned. principal, which goes against protocol. After lunchtime, 12 students, including Avonte, lined up in the cafeteria to go to the technology room. His teacher was out to lunch so the three teaching assistants escorted the class down stairs. According to video footage, the paras

were struggling to keep the class together and, at some point, Avonte went from the middle of the group to the front, with no teacher in front of him. It was then that he bolted down the stairs to the main floor. Details of the video footage released in

Dedicated To The Diagnosis, Treatment F in a ll y A Center and Rehabilitation of Spinal Conditions

HABLAMOS ESPAÑOL We Accept Most Insurances As Full Payment

October were also shared in the report. According to the SCI, Avonte ran past a school safety officer — assigned to the school’s lobby — and she tried to get the boy’s attention by calling out “Excuse me.” In the video, the view of the officer was obstructed for “safety reasons” but Avonte does appear to turn around when the officer called him. He takes three steps towards the desk before the video — made public by the NYPD — cuts out. The next clip is of Avonte running down the hall toward an open door that had been ajar for more than 30 minutes. Approximately three minutes after the boy ran out of the building, the same safety officer casually walked to the door and closed it. When administration was informed that Avonte was missing, the officer told the assistant principal that she witnessed him running around the building and believed he had gone upstairs. The school safety officer was unable to chase after Avonte because she was assisting a parent and child at the front desk. She also said the boy was moving too quickly for her to catch him if she tried. The report has been submitted to Schools Chancellor Carmen Fariña and Queens District Attorney Richard Brown, who will determine if disciplinary actions or further Q investigation is necessary.