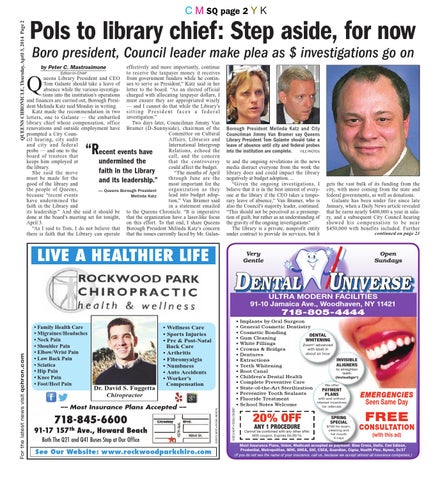 effectively and more importantly, continue to receive the taxpayer money it receives ueens Library President and CEO from government funders while he continTom Galante should take a leave of ues to serve as President,” Katz said in her absence while the various investiga- letter to the board. “As an elected official tions into the institution’s operations charged with allocating taxpayer dollars, I and finances are carried out, Borough Presi- must ensure they are appropriated wisely — and I cannot do that while the Library’s dent Melinda Katz said Monday in writing. Katz made the recommendation in two s i t t i n g P r e s i d e n t f a c e s a f e d e r a l letters, one to Galante — the embattled investigation.” Two days later, Councilman Jimmy Van library chief whose compensation, office renovations and outside employment have Bramer (D-Sunnyside), chairman of the Committee on Cultural prompted a City CounAffairs, Libraries and cil hearing, city audit International Intergroup and city and federal Relations, echoed the probe — and one to the ecent events have call, and the concern board of trustees that that the cont roversy keeps him employed at undermined the could affect the budget. the library. faith in the Library “The months of April She said the move through June are the must be made for the and its leadership.” most important for the good of the library and organization as they the people of Queens, — Queens Borough President lead into budget adopbecause “recent events Melinda Katz tion,” Van Bramer said have undermined the in a statement emailed faith in the Library and its leadership.” And she said it should be to the Queens Chronicle. “It is imperative done at the board’s meeting set for tonight, that the organization have a laser-like focus on this effort. To that end, I share Queens April 3. “As I said to Tom, I do not believe that Borough President Melinda Katz’s concern there is faith that the Library can operate that the issues currently faced by Mr. GalanEditor-in-Chief

Borough President Melinda Katz and City Councilman Jimmy Van Bramer say Queens Library President Tom Galante should take a leave of absence until city and federal probes FILE PHOTOS into the institution are complete. te and the ongoing revelations in the news media distract everyone from the work the library does and could impact the library negatively at budget adoption. ... “Given the ongoing investigations, I believe that it is in the best interest of everyone at the library if the CEO takes a temporary leave of absence,” Van Bramer, who is also the Council’s majority leader, continued. “This should not be perceived as a presumption of guilt, but rather as an understanding of the gravity of the ongoing investigations.” The library is a private, nonprofit entity under contract to provide its services, but it

gets the vast bulk of its funding from the city, with more coming from the state and federal governments, as well as donations. Galante has been under fire since late January, when a Daily News article revealed that he earns nearly $400,000 a year in salary, and a subsequent City Council hearing showed his compensation to be near $450,000 with benefits included. Further continued on page 23

FREE CONSULTATION (with this ad)