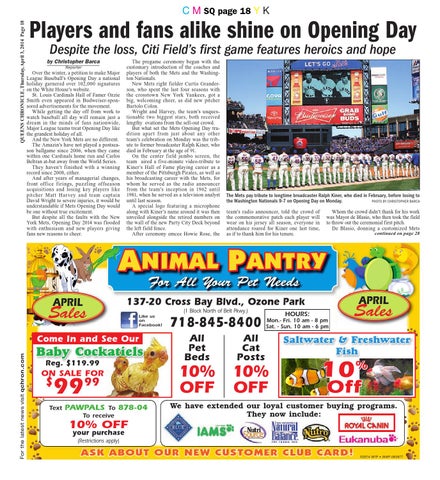 Over the winter, a petition to make Major League Baseball’s Opening Day a national holiday garnered over 102,000 signatures on the White House’s website. St. Louis Cardinals Hall of Famer Ozzie Smith even appeared in Budweiser-sponsored advertisements for the movement. While getting the day off from work to watch baseball all day will remain just a dream in the minds of fans nationwide, Major League teams treat Opening Day like the grandest holiday of all. And the New York Mets are no different. The Amazin’s have not played a postseason ballgame since 2006, when they came within one Cardinals home run and Carlos Beltran at-bat away from the World Series. They haven’t finished with a winning record since 2008, either. And after years of managerial changes, front office firings, puzzling offseason acquisitions and losing key players like pitcher Matt Harvey and team captain David Wright to severe injuries, it would be understandable if Mets Opening Day would be one without true excitement. But despite all the faults with the New York Mets, Opening Day 2014 was flooded with enthusiasm and new players giving fans new reasons to cheer.

The pregame ceremony began with the customary introduction of the coaches and players of both the Mets and the Washington Nationals. New Mets right fielder Curtis Granderson, who spent the last four seasons with the crosstown New York Yankees, got a big, welcoming cheer, as did new pitcher Bartolo Colon. Wright and Harvey, the team’s unquestionable two biggest stars, both received lengthy ovations from the sell-out crowd. But what set the Mets Opening Day tradition apart from just about any other team’s celebration on Monday was the tribute to former broadcaster Ralph Kiner, who died in February at the age of 91. On the center field jumbo screen, the team aired a five-minute video-tribute to Kiner’s Hall of Fame playing career as a member of the Pittsburgh Pirates, as well as his broadcasting career with the Mets, for whom he served as the radio announcer from the team’s inception in 1962 until 1981, when he served as a television analyst until last season. A special logo featuring a microphone along with Kiner’s name around it was then unveiled alongside the retired numbers on the wall of the new Party City Deck beyond the left field fence. After ceremony emcee Howie Rose, the

The Mets pay tribute to longtime broadcaster Ralph Kiner, who died in February, before losing to PHOTO BY CHRISTOPHER BARCA the Washington Nationals 9-7 on Opening Day on Monday. team’s radio announcer, told the crowd of the commemorative patch each player will wear on his jersey all season, everyone in attendance roared for Kiner one last time, as if to thank him for his tenure.

Whom the crowd didn’t thank for his work was Mayor de Blasio, who then took the field to throw out the ceremonial first pitch. De Blasio, donning a customized Mets continued on page 28

A NIMAL P ANTRY For All Your Pet Needs

Come In and See Our

We have extended our loyal customer buying programs. They now include:

10% OFF your purchase (Restrictions apply)