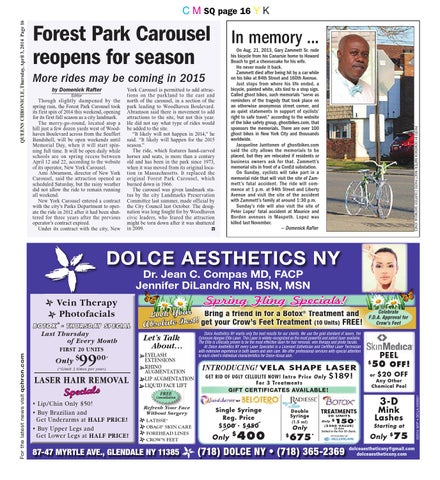 Forest Park Carousel In memory ... reopens for season On Aug. 21, 2013, Gary Zammett Sr. rode his bicycle from his Canarsie home to Howard Beach to get a cheesecake for his wife. He never made it back. Zammett died after being hit by a car while on his bike at 84th Street and 160th Avenue. Just steps from where his life ended, a bicycle, painted white, sits tied to a stop sign. Called ghost bikes, such memorials “serve as reminders of the tragedy that took place on an otherwise anonymous street corner, and as quiet statements in support of cyclists’ right to safe travel,” according to the website of the bike safety group, ghostbikes.com, that sponsors the memorials. There are over 100 ghost bikes in New York City and thousands worldwide. Jacqueline Junttonen of ghostbikes.com said the city allows the memorials to be placed, but they are relocated if residents or business owners ask for that. Zammett’s memorial sits in front of a ConEd substation. On Sunday, cyclists will take part in a memorial ride that will visit the site of Zammett’s fatal accident. The ride will commence at 1 p.m. at 94th Street and Liberty Avenue and visit the site of the accident with Zammett’s family at around 1:30 p.m. Sunday’s ride will also visit the site of Peter Lopez’ fatal accident at Maurice and Borden avenues in Maspeth. Lopez was killed last November. — Domenick Rafter

More rides may be coming in 2015 by Domenick Rafter Editor

Though slightly dampened by the spring rain, the Forest Park Carousel took its first spin of 2014 this weekend, opening for its first full season as a city landmark. The merry-go-round, located atop a hill just a few dozen yards west of Woodhaven Boulevard across from the Seuffert Bandshell, will be open weekends until Memorial Day, when it will start spinning full time. It will be open daily while schools are on spring recess between April 12 and 22, according to the website of its operator, New York Carousel. Ami Abramson, director of New York Carousel, said the attraction opened as scheduled Saturday, but the rainy weather did not allow the ride to remain running all weekend. New York Carousel entered a contract with the city’s Parks Department to operate the ride in 2012 after it had been shuttered for three years after the previous operator’s contract expired. Under its contract with the city, New

York Carousel is permitted to add attractions on the parkland to the east and north of the carousel, in a section of the park leading to Woodhaven Boulevard. Abramson said there is movement to add attractions to the site, but not this year. He did not say what type of rides would be added to the site. “It likely will not happen in 2014,” he said. “It likely will happen for the 2015 season.” The ride, which features hand-carved horses and seats, is more than a century old and has been in the park since 1973, when it was moved from its original location in Massachusetts. It replaced the original Forest Park Carousel, which burned down in 1966. The carousel was given landmark status by the city Landmarks Preservation Committee last summer, made official by the City Council last October. The designation was long fought for by Woodhaven civic leaders, who feared the attraction might be torn down after it was shuttered Q in 2009.

Last Thursday of Every Month For the latest news visit qchron.com

Dolce Aesthetics NY wants only the best results for our clients. We use the gold standard of lasers, the Cynosure Apogee Elite Laser. This Laser is widely-recognized as the most powerful and safest laser available. The Elite is clinically proven to be the most effective laser for hair removal, vein therapy and photo facials. At Dolce Aesthetics NY every Laser Specialist is a Licensed Esthetician and Certified Laser Technician with extensive experience in both lasers and skin care. We offer professional services with special attention to each client’s individual characteristics for Dolce-licous skin.

Any Other Chemical Peel