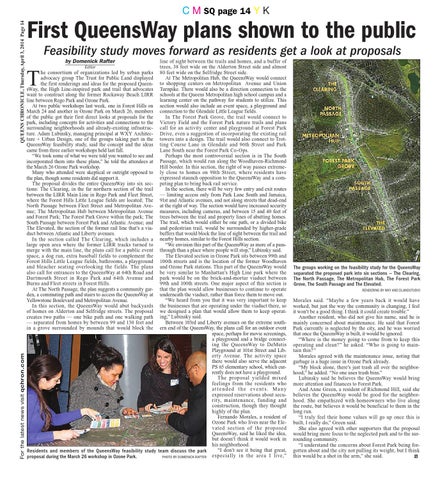 he consortium of organizations led by urban parks advocacy group The Trust for Public Land displayed the first renderings and ideas for the proposed QueensWay, the High Line-inspired park and trail that advocates want to construct along the former Rockaway Beach LIRR line between Rego Park and Ozone Park. At two public workshops last week, one in Forest Hills on March 24 and another in Ozone Park on March 26, members of the public got their first direct looks at proposals for the park, including concepts for activities and connections to the surrounding neighborhoods and already-existing infrastructure. Adam Lubinsky, managing principal at WXY Architecture + Urban Design, one of the groups taking part in the QueensWay feasibility study, said the concept and the ideas came from three earlier workshops held last fall. “We took some of what we were told you wanted to see and incorporated them into these plans,” he told the attendees at the March 26 Ozone Park workshop. Many who attended were skeptical or outright opposed to the plan, though some residents did support it. The proposal divides the entire QueensWay into six sections: The Clearing, in the far northern section of the trail between the LIRR Main Line in Rego Park and Fleet Street, where the Forest Hills Little League fields are located; The North Passage between Fleet Street and Metropolitan Avenue; The Metropolitan Hub between Metropolitan Avenue and Forest Park; The Forest Park Grove within the park; The South Passage between Forest Park and Atlantic Avenue; and The Elevated, the section of the former rail line that’s a viaduct between Atlantic and Liberty avenues. In the section called The Clearing, which includes a large open area where the former LIRR tracks turned to merge with the main line, the plans call for a public event space, a dog run, extra baseball fields to complement the Forest Hills Little League fields, bathrooms, a playground and bleacher seating overlooking the fields. The plans also call for entrances to the QueensWay at 64th Road and Dartmouth Street in Rego Park and 64th Avenue and Burns and Fleet streets in Forest Hills. At The North Passage, the plan suggests a community garden, a commuting path and stairs to access the QueensWay at Yellowstone Boulevard and Metropolitan Avenue. In this section, the QueensWay would abut backyards of homes on Alderton and Selfridge streets. The proposal creates two paths — one bike path and one walking path — separated from homes by between 99 and 130 feet and in a grove surrounded by mounds that would block the

Residents and members of the QueensWay feasibility study proposal during the March 26 workshop in Ozone Park.

line of sight between the trails and homes, and a buffer of trees, 38 feet wide on the Alderton Street side and almost 80 feet wide on the Selfridge Street side. At The Metropolitan Hub, the QueensWay would connect to shopping centers on Metropolitan Avenue and Union Turnpike. There would also be a direction connection to the schools at the Queens Metropolitan high school campus and a learning center on the pathway for students to utilize. This section would also include an event space, a playground and connection to the Glendale Little League fields. In The Forest Park Grove, the trail would connect to Victory Field and the Forest Park nature trails and plans call for an activity center and playground at Forest Park Drive, even a suggestion of incorporating the existing rail towers into a design. The trail would also connect to Trotting Course Lane in Glendale and 96th Street and Park Lane South near the Forest Park Co-Ops. Perhaps the most controversial section is in The South Passage, which would run along the Woodhaven-Richmond Hill border. In this section, the right of way passes extremely close to homes on 98th Street, where residents have expressed staunch opposition to the QueensWay and a competing plan to bring back rail service. In the section, there will be very few entry and exit routes — limiting access only from Park Lane South and Jamaica, 91st and Atlantic avenues, and not along streets that dead-end at the right of way. The section would have increased security measures, including cameras, and between 15 and 40 feet of trees between the trail and property lines of abutting homes. The trail, which would either be one path, or a divided bike and pedestrian trail, would be surrounded by higher-grade buffers that would block the line of sight between the trail and nearby homes, similar to the Forest Hills section. “We envision this part of the QueensWay as more of a passthrough than a place where people will stop,” Lubinsky said. The Elevated section in Ozone Park sits between 99th and 100th streets and is the location of the former Woodhaven and Ozone Park stations. This part of the QueensWay would be very similar to Manhattan’s High Line park where the park would be on the brick-and-mortar viaduct between 99th and 100th streets. One major aspect of this section is that the plan would allow businesses to continue to operate underneath the viaduct, rather than force them to move out. “We heard from you that it was very important to keep the businesses that are operating under the viaduct there, so we designed a plan that would allow them to keep operating,” Lubinsky said. Between 103rd and Liberty avenues on the extreme southern end of the QueensWay, the plans call for an outdoor event space, perhaps for movie screenings, a playground and a bridge connecting the QueensWay to DeMutis Playground at 101st Street and Liberty Avenue. The activity space there would also serve the adjacent PS 65 elementary school, which currently does not have a playground. The proposal yielded mixed feelings from the residents who at t ended t he event s. Ma ny expressed reservations about security, maintenance, funding and construction, though they thought highly of the plan. Fernando Morales, a resident of Ozone Park who lives near the Elevated section of the proposed QueensWay, said he liked the idea, but doesn’t think it would work in his neighborhood. “I don’t see it being that great, team discuss the park PHOTO BY DOMENICK RAFTER especially in the area I live,”

The groups working on the feasibility study for the QueensWay separated the proposed park into six sections — The Clearing, The North Passage, The Metropolitan Hub, The Forest Park Grove, The South Passage and The Elevated. RENDERING BY WXY AND DLANDSTUDIO

Morales said. “Maybe a few years back it would have worked, but just the way the community is changing, I feel it won’t be a good thing. I think it could create trouble.” Another resident, who did not give his name, said he is mainly concerned about maintenance. He said that Forest Park currently is neglected by the city, and he was worried that once the QueensWay is built, it would be ignored. “Where is the money going to come from to keep this operating and clean?” he asked. “Who is going to maintain this?” Morales agreed with the maintenance issue, noting that garbage is a huge issue in Ozone Park already. “My block alone, there’s just trash all over the neighborhood,” he added. “No one uses trash bins.” Lubinsky said he believes the QueensWay would bring more attention and finances to Forest Park. And Anne Green, a resident of Richmond Hill, said she believes the QueensWay would be good for the neighborhood. She empathized with homeowners who live along the route, but believes it would be beneficial to them in the long run. “I truly feel their home values will go up once this is built, I really do,” Green said. She also agreed with other supporters that the proposal would bring more focus to the neglected park and to the surrounding community. “I understand the concerns about Forest Park being forgotten about and the city not pulling its weight, but I think Q this would be a shot in the arm,” she said.