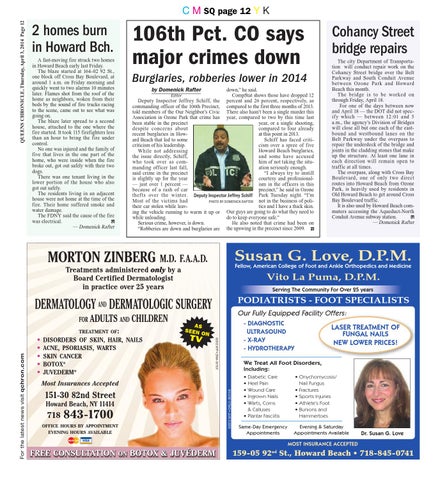 A fast-moving fire struck two homes in Howard Beach early last Friday. The blaze started at 164-02 92 St., one block off Cross Bay Boulevard, at around 1 a.m. on Friday morning and quickly went to two alarms 10 minutes later. Flames shot from the roof of the home as neighbors, woken from their beds by the sound of fire trucks racing to the scene, came out to see what was going on. The blaze later spread to a second house, attached to the one where the fire started. It took 115 firefighters less than an hour to bring the fire under control. No one was injured and the family of five that lives in the one part of the home, who were inside when the fire broke out, got out safely with their two dogs. There was one tenant living in the lower portion of the house who also got out safely. The residents living in an adjacent house were not home at the time of the fire. Their home suffered smoke and water damage. The FDNY said the cause of the fire Q was electrical. — Domenick Rafter

down,” he said. CompStat shows those have dropped 12 Deputy Inspector Jeffrey Schiff, the percent and 26 percent, respectively, as commanding officer of the 106th Precinct, compared to the first three months of 2013. told members of the Our Neighbor’s Civic There also hasn’t been a single murder this Association in Ozone Park that crime has year, compared to two by this time last year, or a single shooting, been stable in the precinct compared to four already despite concerns about at this point in 2013. recent burglaries in HowSchiff has faced critiard Beach that led to some cism over a spree of five criticism of his leadership. Howard Beach burglaries, While not addressing and some have accused the issue directly, Schiff, him of not taking the situwho took over as comation seriously enough. manding officer last fall, “I always try to instill said crime in the precinct courtesy and professionalis slightly up for the year ism in the officers in this — just over 1 percent — precinct,” he said in Ozone because of a rash of car thefts over the winter. Deputy Inspector Jeffrey Schiff Park Tuesday night. “I’m Most of the victims had PHOTO BY DOMENICK RAFTER not in the business of politics and I have a thick skin. their car stolen while leaving the vehicle running to warm it up or Our guys are going to do what they need to do to keep everyone safe.” while unloading. He also noted that crime had been on Serious crime, however, is down. “Robberies are down and burglaries are the upswing in the precinct since 2009. Q Editor

Fellow, American College of Foot and Ankle Orthopedics and Medicine

Vito La Puma, D.P.M. Serving The Community For Over 25 years

We Treat All Foot Disorders,

The city Department of Transportation will conduct repair work on the Cohancy Street bridge over the Belt Parkway and South Conduit Avenue between Ozone Park and Howard Beach this month. The bridge is to be worked on through Friday, April 18. For one of the days between now and April 18 — the DOT did not specify which — between 12:01 and 5 a.m., the agency’s Division of Bridges will close all but one each of the eastbound and westbound lanes on the Belt Parkway under the overpass to repair the underdeck of the bridge and joints in the cladding stones that make up the structure. At least one lane in each direction will remain open to traffic at all times. The overpass, along with Cross Bay Boulevard, one of only two direct routes into Howard Beach from Ozone Park, is heavily used by residents in Old Howard Beach to get around Cross Bay Boulevard traffic. It is also used by Howard Beach commuters accessing the Aqueduct-North Q Conduit Avenue subway station. — Domenick Rafter

FOR ADULTS AND CHILDREN