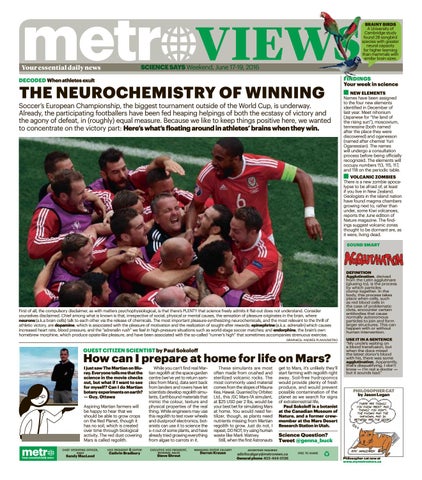 THE NEUROCHEMISTRY OF WINNING

Soccer’s European Championship, the biggest tournament outside of the World Cup, is underway. Already, the participating footballers have been fed heaping helpings of both the ecstasy of victory and the agony of defeat, in (roughly) equal measure. Because we like to keep things positive here, we wanted to concentrate on the victory part: Here’s what’s floating around in athletes’ brains when they win.

FINDINGS Your week in science NEW ELEMENTS Names have been assigned to the four new elements identified in December of last year. Meet nihonium (Japanese for “the land of the rising sun”), moscovium, tennessine (both named after the place they were discovered) and oganesson (named after chemist Yuri Oganessian). The names will undergo a consultation process before being officially recognized. The elements will occupy numbers 113, 115, 117, and 118 on the periodic table. VOLCANIC ZOMBIES There is a new zombie apocalypse to be afraid of, at least if you live in New Zealand. Geologists in the island nation have found magma chambers growing next to, rather than under, some Kiwi volcanoes, reports the June edition of Nature magazine. The findings suggest volcanic zones thought to be dormant are, as it were, living dead. SOUND SMART

First of all, the compulsory disclaimer, as with matters psychophysiological, is that there’s PLENTY that science freely admits it flat-out does not understand. Consider yourselves disclaimed. Chief among what is known is that, irrespective of social, physical or mental causes, the sensation of pleasure originates in the brain, where neurons (a.k.a brain cells) talk to each other via the release of chemicals. The most important pleasure-synthesizing neurochemicals, and the most relevant to the thrill of athletic victory, are dopamine, which is associated with the pleasure of motivation and the realization of sought-after rewards; epinephrine (a.k.a. adrenalin) which causes increased heart rate, blood pressure, and the “adrenalin rush” we feel in high-pressure situations such as world-stage soccer matches; and endorphins, the brain’s own homebrew morphine, which produce opiate-like pleasure, and have been associated with the so-called ”runner’s high” that sometimes accompanies strenuous exercise. GRAPHICS: ANDRÉS PLANA/METRO

How can I prepare at home for life on Mars? I just saw The Martian on Bluray. Everyone tells me that the science in the movie checks out, but what if I want to see for myself? Can I do Martian botany experiments on earth? — Guy, Ottawa Aspiring Martian farmers will be happy to hear that we should be able to grow crops on the Red Planet, though it has no soil, which is created over time through biological activity. The red dust covering Mars is called regolith. CHIEF OPERATING OFFICER, PRINT

While you can’t find real Martian regolith at the space-garden centre (we’ve yet to return samples from Mars), data sent back from landers and rovers have let scientists develop regolith simulants, Earthbound materials that mimic the colour, texture and physical properties of the real thing. While engineers may use this regolith to test rover wheels and dustproof electronics, botanists can use it to science the s--t out of some plants, and have already tried growing everything from algae to carrots in it. EXECUTIVE VICE PRESIDENT, REGIONAL SALES

These simulants are most often made from crushed and sterilized volcanic rocks. The most commonly used material comes from the slopes of Mauna Kea, Hawaii. Quarried by Orbitec Ltd., this JSC Mars-1A simulant, at $25 USD per 2 lbs, would be your best bet for simulating Mars at home. You would need fertilizer, though, as plants need nutrients missing from Martian regolith to grow. Just do not, I repeat, DO NOT, try using human waste like Mark Watney. Still, when the first Astronauts

get to Mars, it’s unlikely they’ll start farming with regolith right away. Soil-free hydroponics would provide plenty of fresh produce, and would prevent possible contamination of the planet as we search for signs of extraterrestrial life. Paul Sokoloff is a botanist at the Canadian Museum of Nature, and a former crewmember at the Mars Desert Research Station in Utah.

DEFINITION Agglutination, derived from the Latin agglutinare (glueing to), is the process by which particles clump together. In the body, this process takes place when cells, such as red blood cells in the case of problematic clots, encounter certain antibodies that cause normally autonomous particles to join and form larger structures. This can happen with or without human intervention. USE IT IN A SENTENCE “My uncle’s waiting on a blood transfusion, but when the docs mixed the latest donor’s blood with his, there was some agglutination. Apparently, that’s disqualifying. I don’t know — I’m not a doctor — but it sounds bad.”

PHILOSOPHER CAT by Jason Logan THERE ARE THINGS YOU KNOW ABOUT AND THINGS YOU DON’T, THE KNOWN AND THE UNKNOWN, AND IN BETWEEN ARE THE DOORS.