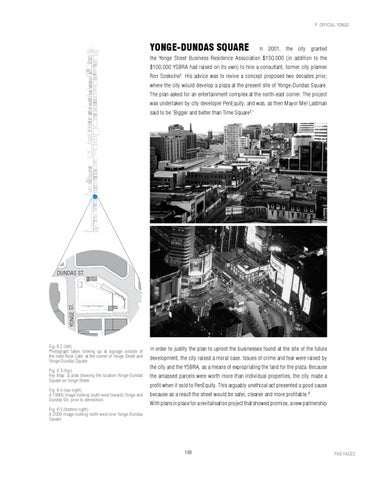 In 2001, the city granted the Yonge Street Business Residence Association $150,000 (in addition to the $100,000 YSBRA had raised on its own) to hire a consultant, former city planner Ron Soskolne1. His advice was to revive a concept proposed two decades prior, where the city would develop a plaza at the present site of Yonge-Dundas Square. The plan asked for an entertainment complex at the north-east corner. The project was undertaken by city developer PenEquity, and was, as then Mayor Mel Lastman said to be â&#x20AC;&#x2DC;Bigger and better than Time Square2.â&#x20AC;&#x2122;

In order to justify the plan to uproot the businesses found at the site of the future development, the city raised a moral case. Issues of crime and fear were raised by the city and the YSBRA, as a means of expropriating the land for the plaza. Because the amassed parcels were worth more than individual properties, the city made a profit when it sold to PenEquity. This arguably unethical act presented a good cause because as a result the street would be safer, cleaner and more profitable.3 With plans in place for a revitalisation project that showed promise, a new partnership This thesis claims that Yonge Street is a democratic urban platform built upon complex layers. The diverse, overlapping and kinetic happenin...

This thesis claims that Yonge Street is a democratic urban platform built upon complex layers. The diverse, overlapping and kinetic happenin...