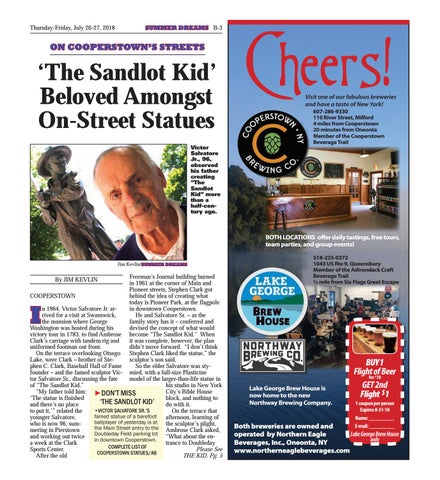 ‘The Sandlot Kid’ Beloved Amongst On-Street Statues Victor Salvatore Jr., 96, observed his father creating “The Sandlot Kid” more than a half-century ago.

Visit one of our fabulous breweries and have a taste of New York! 607-286-9330 110 River Street, Milford 4 miles from Cooperstown 20 minutes from Oneonta Member of the Cooperstown Beverage Trail

Freeman’s Journal building burned in 1961 at the corner of Main and Pioneer streets, Stephen Clark got COOPERSTOWN behind the idea of creating what today is Pioneer Park, at the flagpole n 1964, Victor Salvatore Jr. arin downtown Cooperstown. rived for a visit at Swanswick, He and Salvatore Sr. – as the the mansion where George family story has it – conferred and Washington was hosted during his devised the concept of what would victory tour in 1783, to find Ambrose become “The Sandlot Kid.” When Clark’s carriage with tandem rig and it was complete, however, the plan uniformed footman out front. didn’t move forward. “I don’t think On the terrace overlooking Otsego Stephen Clark liked the statue,” the Lake, were Clark – brother of Stesculptor’s son said. phen C. Clark, Baseball Hall of Fame So the elder Salvatore was styfounder – and the famed sculptor Vic- mied, with a full-size Plasticine tor Salvatore Sr., discussing the fate model of the larger-than-life statue in of “The Sandlot Kid.” his studio in New York “My father told him: City’s Bible House DON’T MISS ‘The statue is finished block, and nothing to ‘THE SANDLOT KID’ do with it. and there’s no place •victor salvatore sr.’s to put it,’” related the On the terrace that famed statue of a barefoot younger Salvatore, afternoon, learning of ballplayer of yesterday is at who is now 96, sumthe sculptor’s plight, the Main Street entry to the Ambrose Clark asked, mering in Pierstown Doubleday Field parking lot “What about the enand working out twice in downtown Cooperstown. a week at the Clark trance to Doubleday complete list of Sports Center. Please See cooperstown statues/a8 After the old THE KID, Pg. 5 By JIM KEVLIN 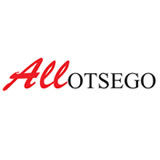